"I think I found Trico from Last Guardian in this game. He was embarrassed where he ended up. It seems like EA just keeps throwing bad mojo all over the place." First when I heard about Sea of Solitude it was at E3 and I was enthusiastic about It. Seemed like something like ICO/Rime meets dark side of the moon. I kind of liked Rime, and ICO is great game, so I was ready to spend my money on another similar game.

Sea of Solitude was developed by German studio Jo-Mei. This is their first project as that studio, but I also couldn’t find anything worth mentioning as their past gaming development projects. Game is out from July 5th 2019th for PC, PS4 and Xbox One. Its only 20$ which is not much but considering you can beat the game in 3 hours, it’s too much. 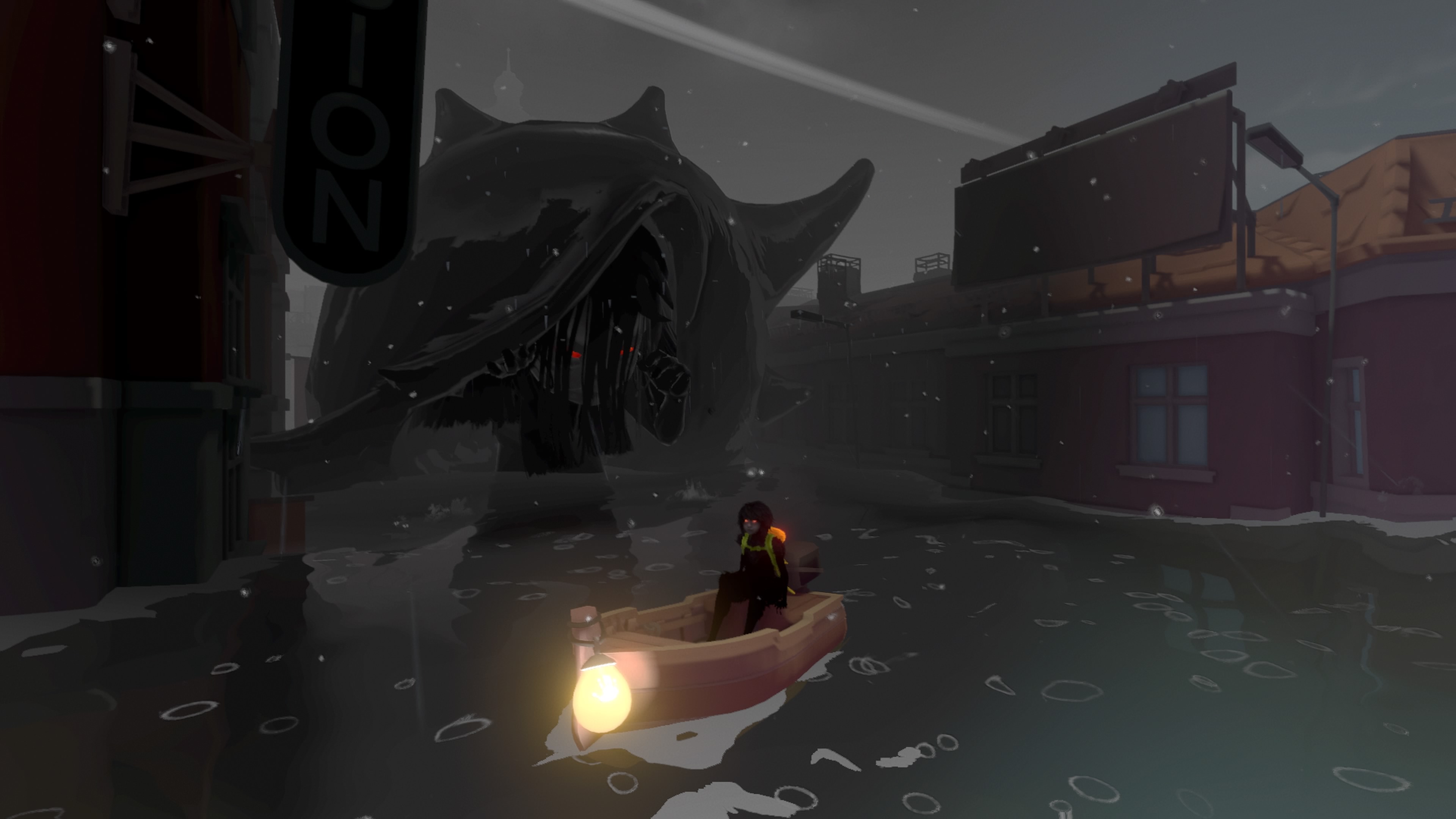 You will play as Kay, a girl stuck in metaphoric world where every character represents some feeling of her life and every struggle she lived through. All of them are presented as some kind of monster. In general, I like this kind of games - when they do a fine job. Monster design is quite good I must admit, really good cell shading art style. The world you are in is a world filled with water, darkness and of course – light. As you venture through sorrow and inner struggles in that world, you will release all those bottled up feelings and reveal all connections between Kay, her life and living beings that you meet. Kay has some serios depressions, loneliness and all kinds of fears. 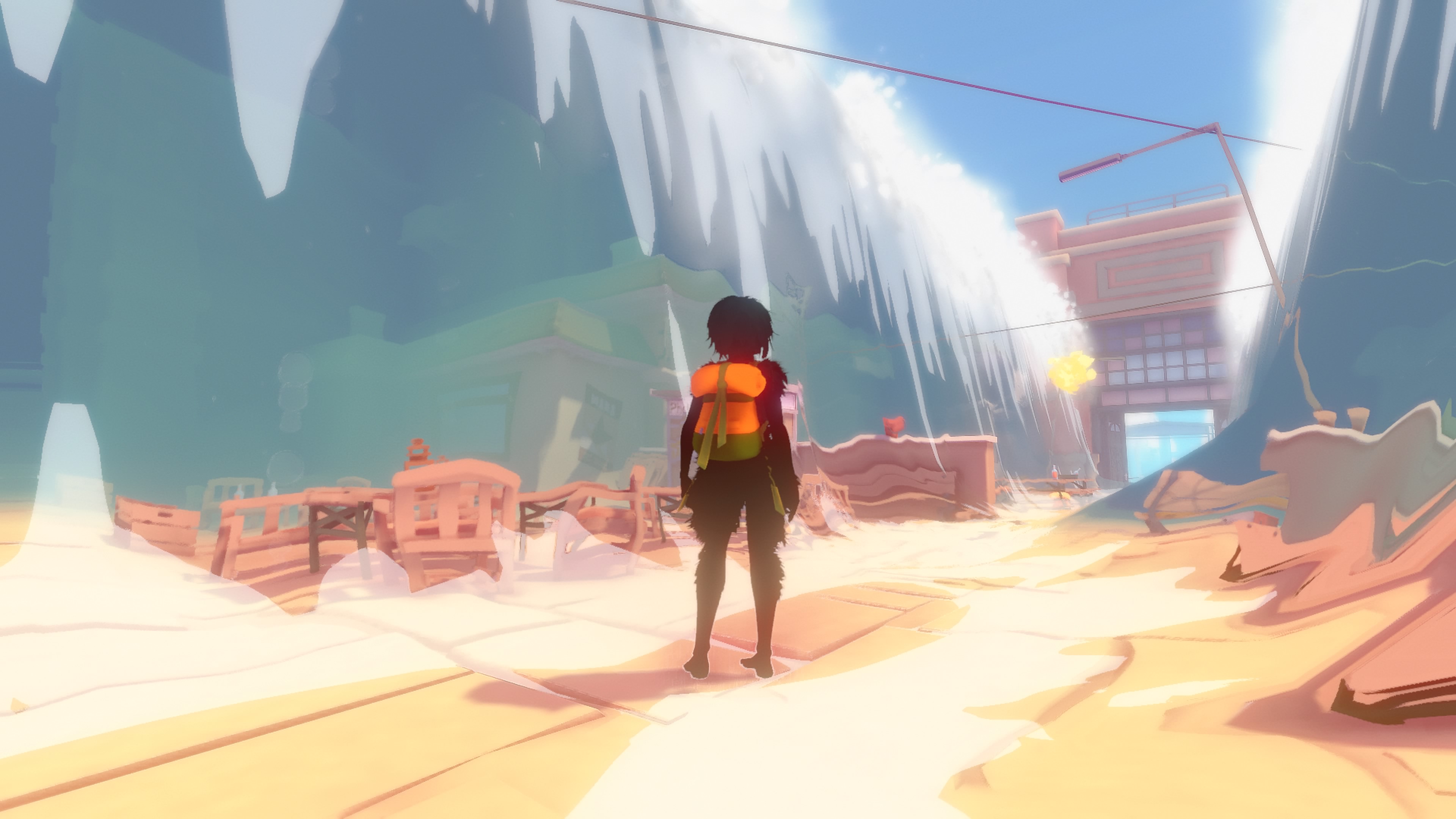 Some paths will be pretty and sweet. Too bad there are only few.

Art style is really nice, but at the same time there are so many same buildings and assets they re-used, making only some areas in the game unique. Even though game is short, you will start to notice same pattern all over the place. I can understand this since team behind the game is small. Still, I don’t think many will care about that. We all want good experience and there are games that can give us that for the same money. Anyway, your adventure starts in the middle of nowhere. Soon, you will meet your first monster and you will have to find your way around it. The fish monster will lurk in waters and eat you if you swim close to it or slow. Do not worry, if it eats you 20 times, you get a trophy. It’s all about jumping around and getting to objective marker on the map. Using your boat lights the way, as well as when you reach certain objects that can lighten up everything around. When world turns from darkness, it looks nice, lively, you can swim without any worry of being eaten. 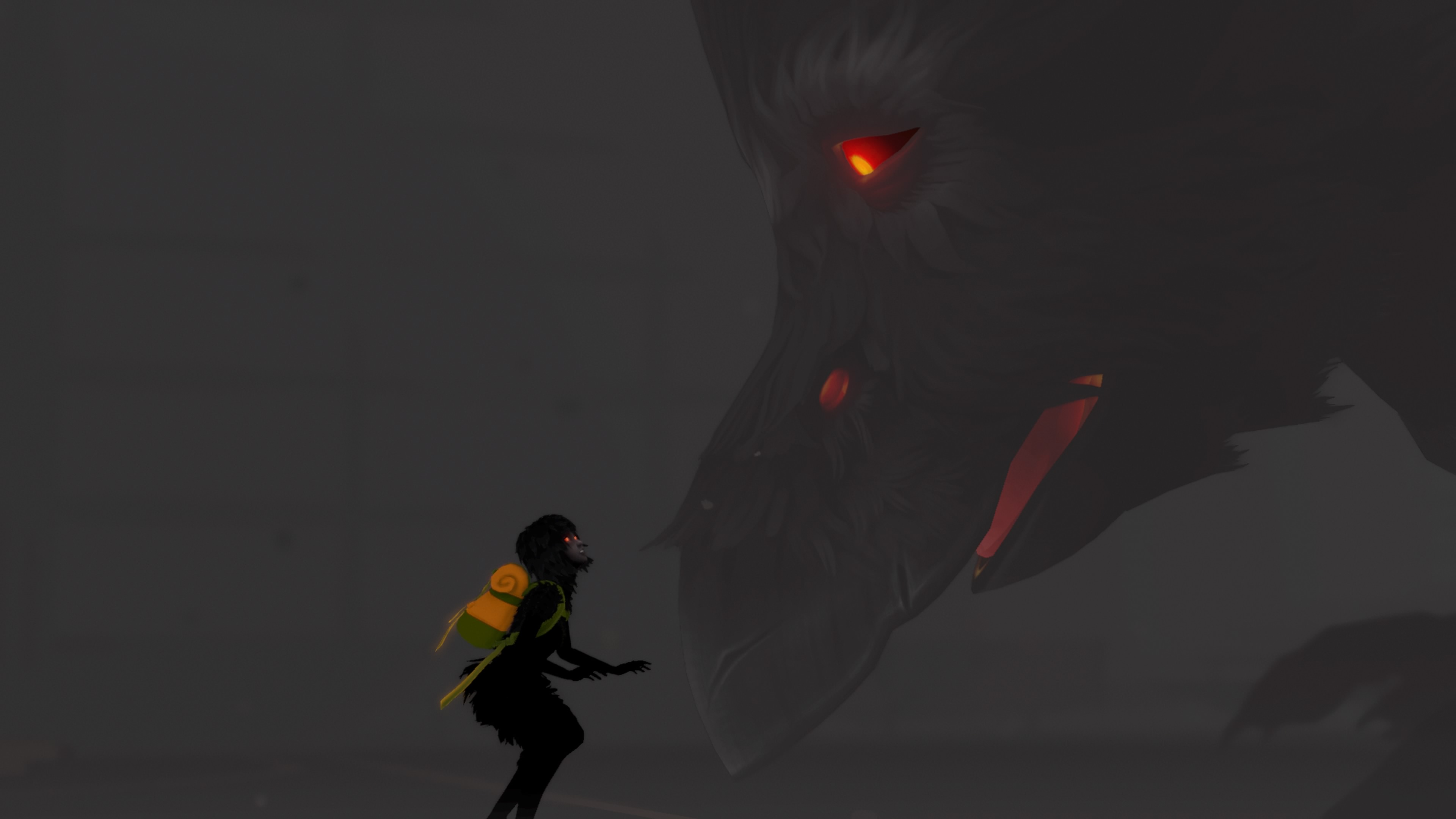 Trico, is that you? Poor bird escaped from The Last Guardian.

Side content is almost not present. Through the journey you will collect messages in bottles which gives some extent to the story, and you can shoo away seagulls. Nothing else. Few trophies can count like side content and hidden scenes, but its too shallow to consider it that way. Game is very linear and at times quite boring. Last portion of the game is nicer, there are some snowy landscapes and more to look forward to than at the beginning. Puzzles are so simple, plus you can use Flare gun to show you where to go, it doesn’t make much sense to even mention them. It’s all about reaching stuff to reveal story and learn about Kay’s brother, parents, boyfriend etc. 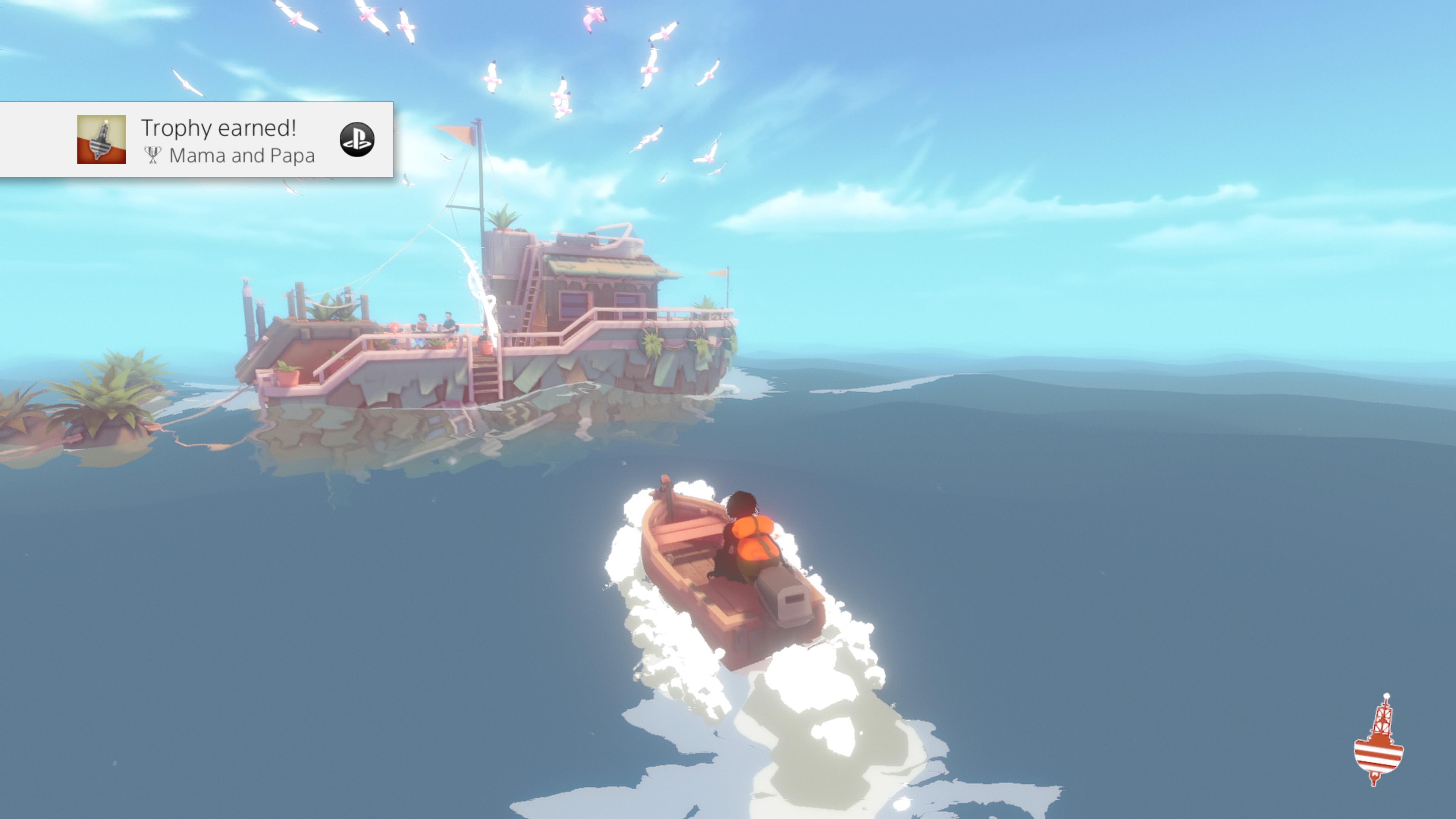 Your boat is a safe place.

I really hated movement and jumping in this game. It is very clunky and un-natural when you must aim for a perfect jump. Often you will bump into walls, which can block your jump if you are too close. When I played one part of the game, I managed to swim without a boat and open some gates. Next objective was to drive a boat through the gate, but fish was in the middle making my path impossible. I had to restart for boat to show where I should have been in the first place. Some areas will spawn enemies that will chase you, which you can ditch by using flare gun next to light – that light will disperse and get rid of darkness. Often, I found it also a bit frustrating and clunky. 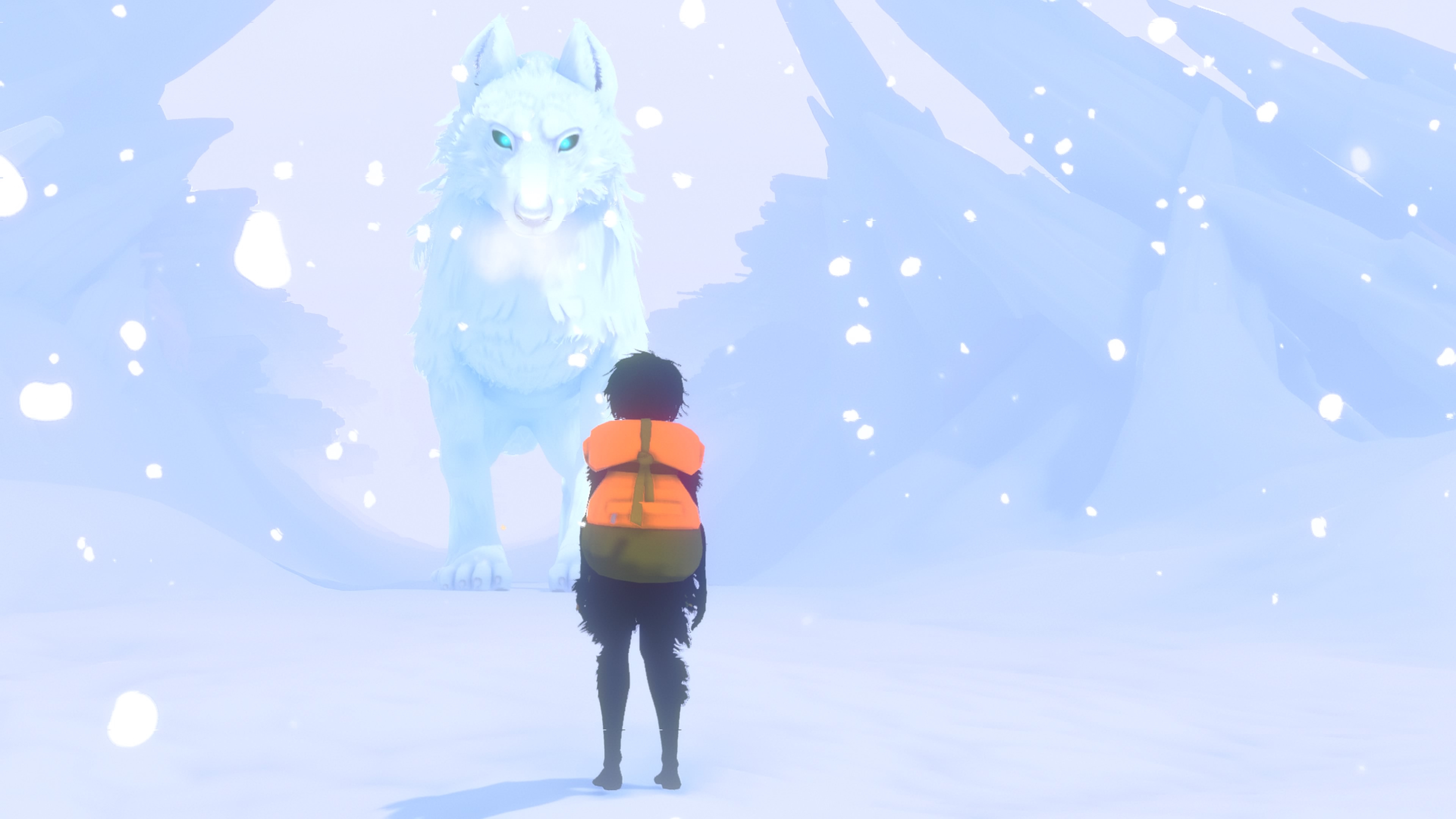 Ok, I really dig the whole snowy part of the game.

Storytelling is mediocre, just something about the whole presentation feels a bit off. I couldn’t “feel” what they wanted to transfer to players as experience. It is not by any means bad, just mediocre, already seen many times. Ending is much better than first half of the game, which raised my grade towards the game a bit.

Still, out of all similar games I’ve played, this one seems bellow that rank. If you want to play something simple with nice art style and you feel like depression can help you – this is not a bad choice. Monster design is above everything else in the game, at times it looks spooky and sick, like it should be. All in all, game can be worth the money on some discount, otherwise just buy ICO again or Shadow of Colossus and enjoy the best of the best there is.

"Sea of disappointment and hope for a better future of simple art games."