"When you cannot reach, shift gravity. When you can't move your furniture, use stasis. When you want game with best story out there – do not play Gravity Rush 2. Otherwise, it’s a lot of fun." When you cannot reach, shift gravity. When you can't move your furniture, use stasis. When you want game with best story out there – do not play Gravity Rush 2. Otherwise, it’s a lot of fun.

There is no other game similar to Gravity Rush. That is the first thing worth mentioning. Behind the scenes we can find Japan Studio and their minds. More specifically, a little branch of them, called Team Gravity – they did Siren games and Gravity Rush, both and one re-master. Just looking at what this big studio accomplished is astounding. Titles like Legend of Dragoon, Rogue Galaxy, Shadow of the Colossus, even Bloodborne…Wow, right?

Having a bit of spared time, waiting for Oninaki, I had this little fellow lined-up next to my other backlog games. “Gravity Rush”, I shouted, intrigued with the game for some time. Pulled the bad boy out, installed it and I was ready to try. 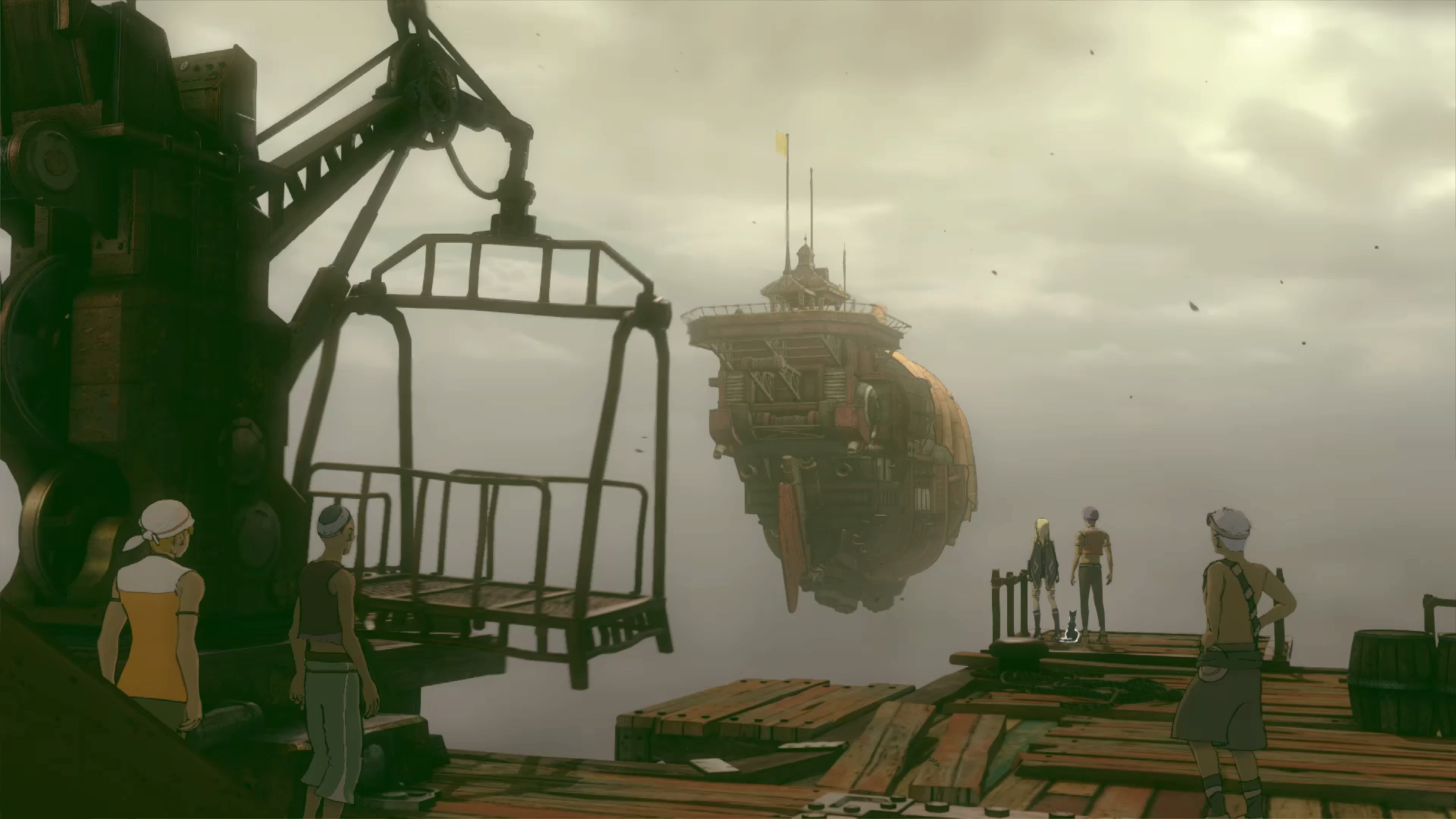 Exterior will keep you busy.

First mission was nothing compared to what comes later. Lowering down in the depth of endless hole just to mine for some red gems gives blurry picture of what could this be about. Gems hidden in their cocoons is more or less everyday reality, just without red gems and cocoons deep in mining area. You will find yourself digging in some suite, but very soon Kat reveals and runs like the wind itself, trying to survive. Even here you can see how beautiful the graphics are, really eye candy cartoonish artwork. And even in the start, you will start to hate the camera. Soon after you will arrive at the first settlement. Everything in this game is floating in the sky. Red gems powering cities. The story goes small and bit by bit, introducing Cecie, Syd and few other characters. The routine is to dig, harvest and satisfy traders. Soon the story gets few twists, giving us Raven, the most beautiful anime chick I’ve seen lately. She is actually Kats sidekick, but brainwashed by military which never does anything good against the weak. As story progress, more pieces are unravelled which in the end results as damn fine ending I would say. 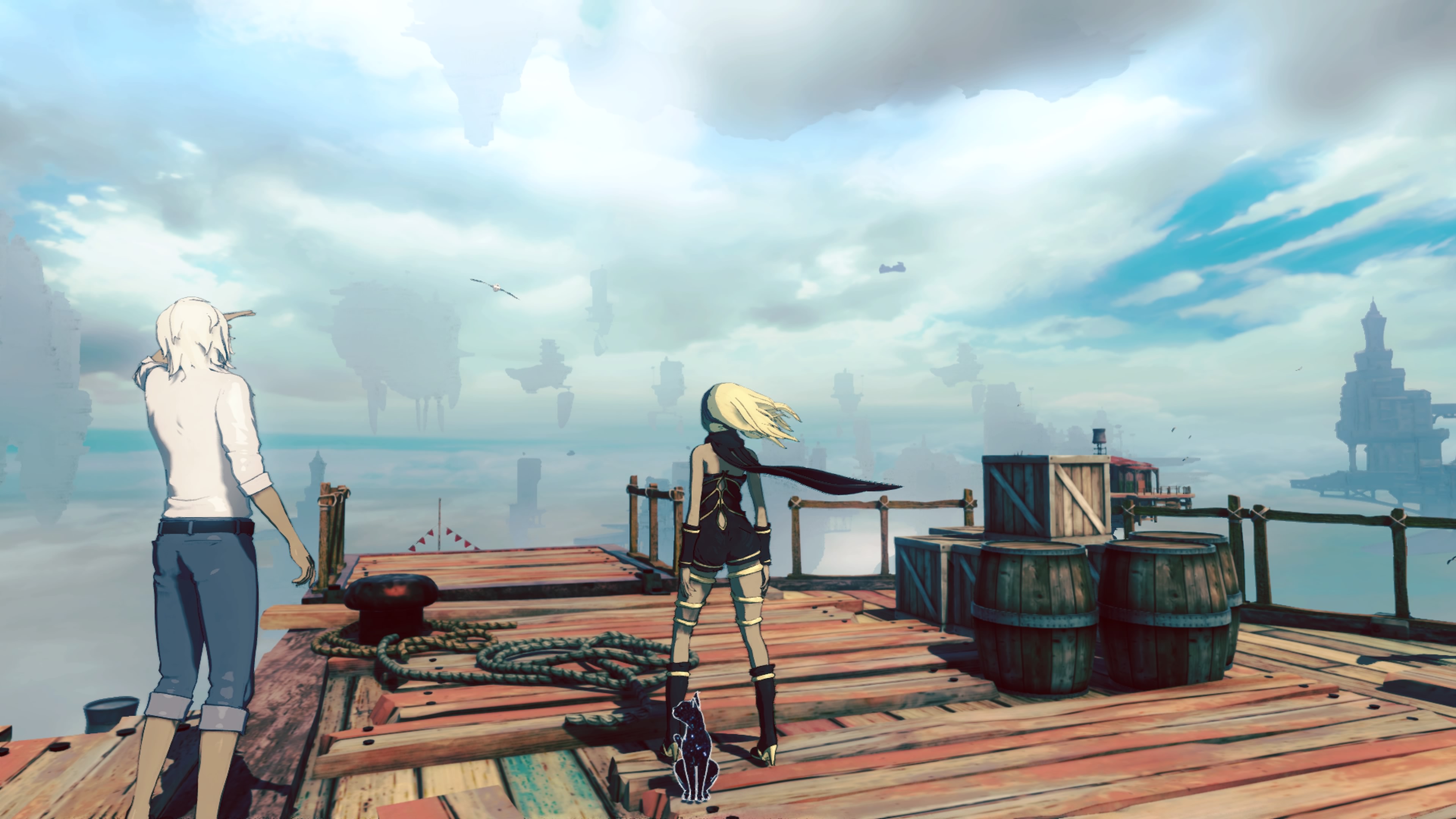 Wouldn't you wanna live there?

Story is mediocre. The way it is told is magnificent, all cutscenes are like a comic with some great artwork. I loved it so much, too bad the storytelling is a bit above the middle, excluding the end where I enjoyed the most. It’s like they wrote ending first, then tried the rest of the game and ended up not being so good. Mostly you will go through similar missions where you either need to rescue people, kick some gravity ass or kick more ass doing certain challenges. It’s really fun at the beginning, but as time pass, you will start to crave to more than just simple repetitiveness in every damn mission. There will always be few cool ones that makes it worthwhile, but reading that first game had same issues, I just don’t understand why not going 2 steps further and make a masterpiece. That is what is funny, the game is really good and has potential to be even better. Hopefully there will be 3rd game that will solve all the frustrations. 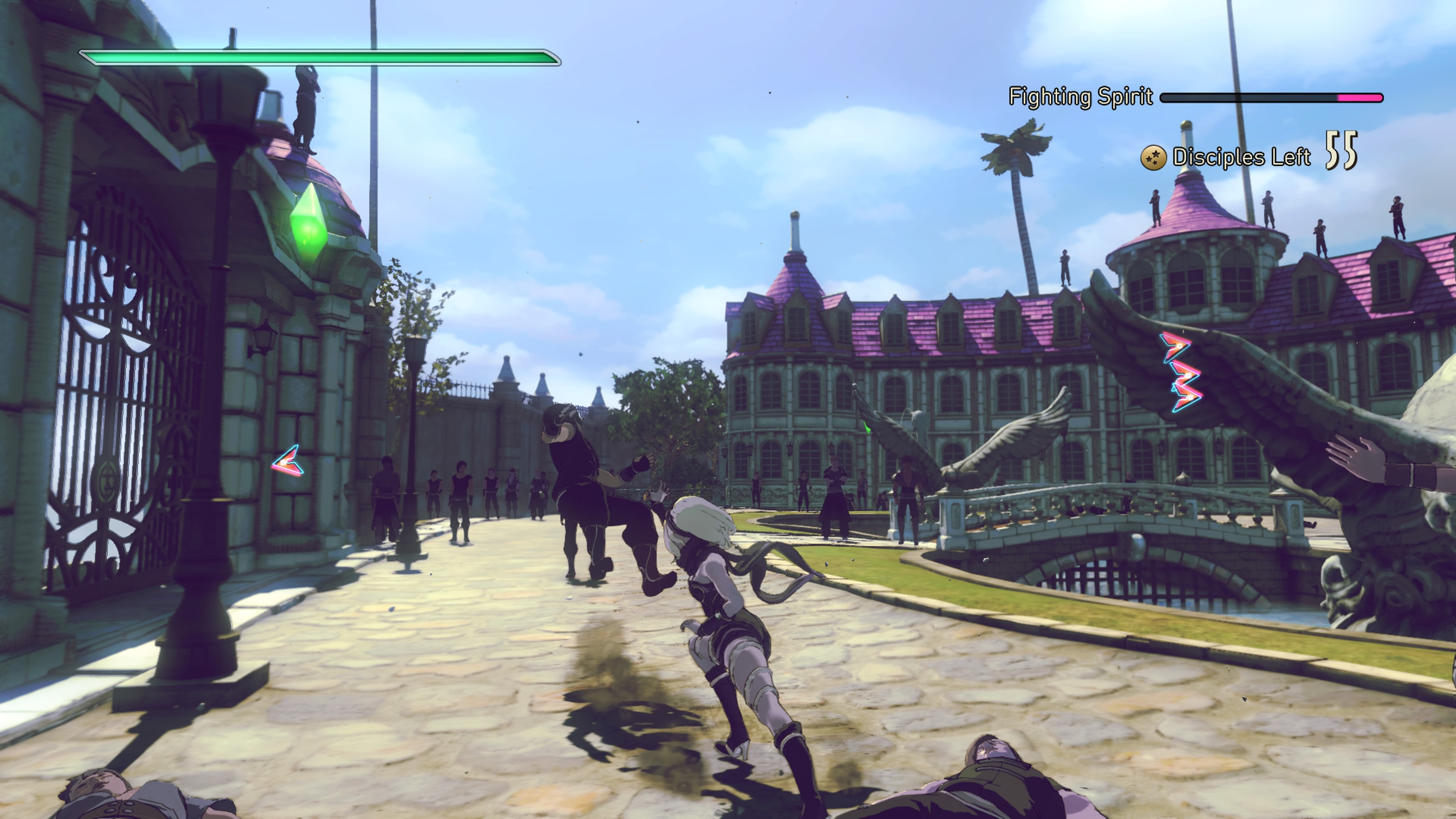 A lot of button smashing. Fights can be a drag sometimes.

What are you anyway? A Kat, blonde girl having – a cat. That pussy cat hold great powers, known as the…I have no idea about the name, but having that cat close gives Kat ability to shift gravity – to be Spiderman, Superman and Iron man at the same time. One tilt of the button and you are flying. World becomes so big while you cruise your way through stinky air looking for unexplored areas bellow or above islands. The whole map is basically settlements residing on the islands floating in the air. They are unique enough, worth exploring, full of people, dogs and cats. You will explore 4 islands of the first portion of the game and 4 in second part. Add few mining areas (5 of them exactly). That is what you will see. They are big enough, it feels like open world game in the sky, so beautiful and fresh. No other game have this setting and mechanics. When you see something in the distance, just fly there. Transport vehicles circle through the air, everything happening around you gives that feeling like game breeds life. Only minus is that you want more of those lovely surrounding to explore and fly to. I loved what game offers. Fast travel makes it more quick to reach some areas, but I just felt flying is fun and worth doing all the time. 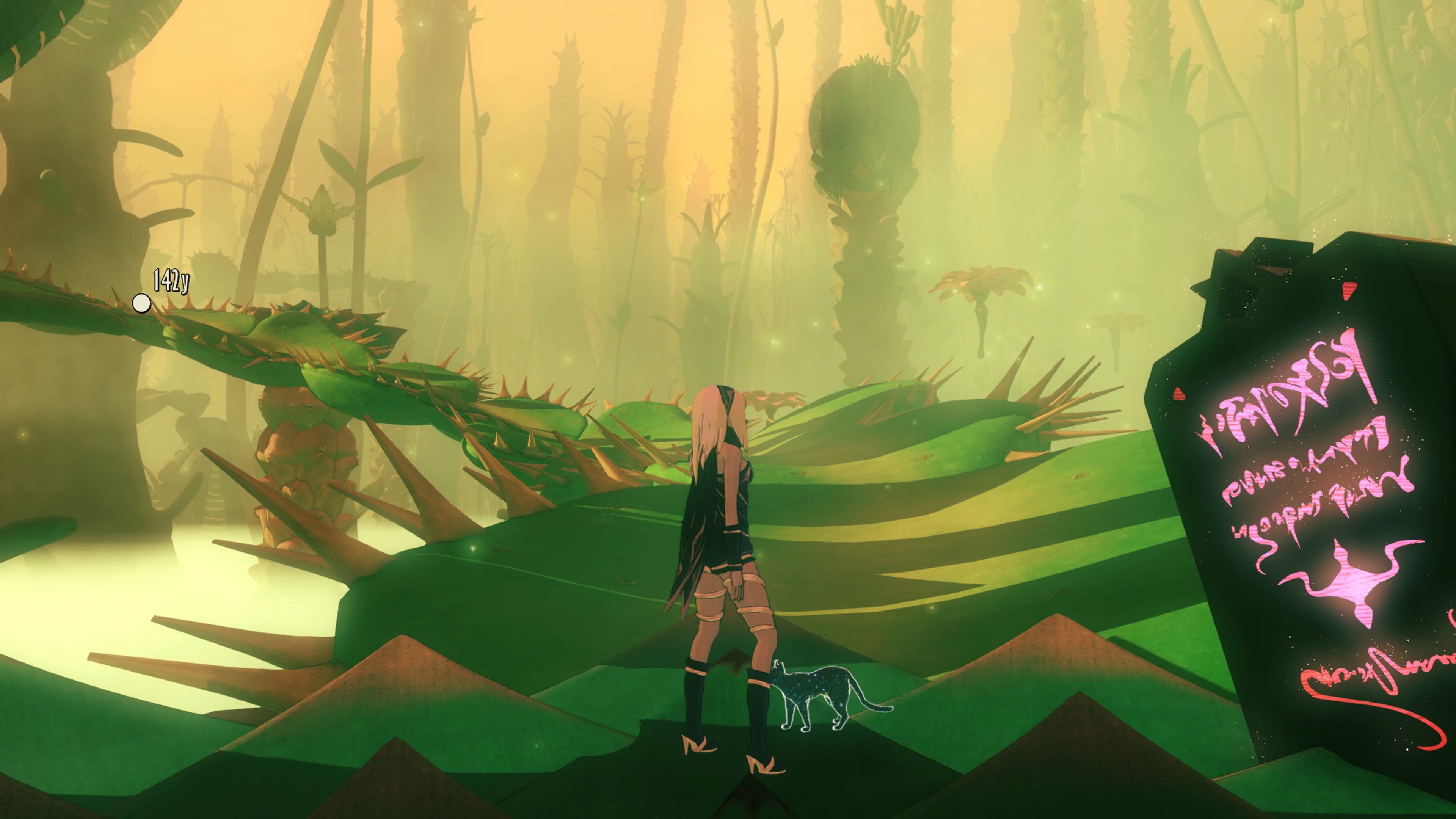 I just love the colors. Look how pretty.

Most of the time will pass flying and using your gravity skills. There are 3 styles here, normal being mode where when you fall and run, normal gravity implies. You will learn Lunar style a bit later in the game, that is the best one, gravity is weaker and you practically glide by running. You can do high jumps, front jumps for fast movement, chain more often attacks etc. Lastly, Jupiter style is heavy mode and total opposite from Lunar style. You are heavy and slow, but impact when you land breaks weak floors and attacks works great against armored enemies. What I like is how you switch those – gentle sweep from middle to top on your joystick middle touch change to Lunar, pressing middle to normal and middle to down shifts to Jupiter. It’s fluent, fast and looks nice when you change. Game use all those joystick possibilities, like you can glide using different joystick positions. Or you can switch that off and control using sticks. One mission at the end use more combinations with your touch, it’s cool that some games support this. 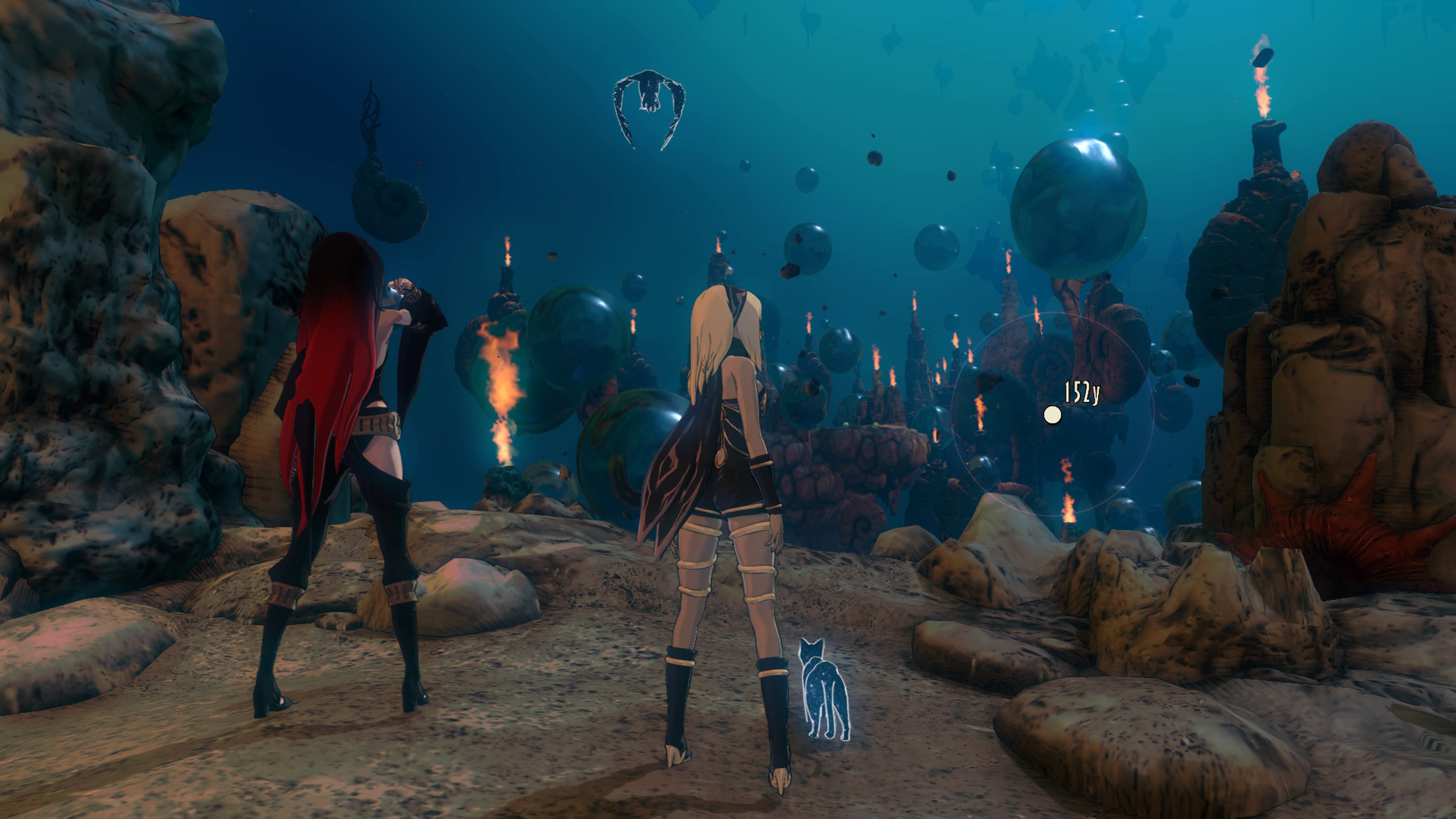 At the same time being cool and all when you fly, camera will mess with you all the time. As soon as you start traveling in the air, camera likes to tilt to different angles. I was a bit dizzy from all the rotations that happens. You can still reset to default, but doing that every 2 seconds is a bit too much. It’s a big chunk of making this perfect since you can travel in all directions, there are endless possibilities of doing stuff in this game. Some missions you can stealth by walking on the celling, or you can force through. Alongside your basic gravity kicks and normal attacks, you can use your stasis to grab nearby object and throw them at enemies. This is what I used the most, as it is most efficient and fastest way to get rid of hordes. If you chain attacks you can fill the special bar where you can use special attack for strongest attacks there is – unique per style. Arcade and fighting are good, but there is a lot to improve, mashing buttons gets repetitive as for example destroying same enemies. Combine that will lousy camera and you will hit the wall more times than what you need to hit. There is also dodge button, but I rarely used it. More variety would make everything better. 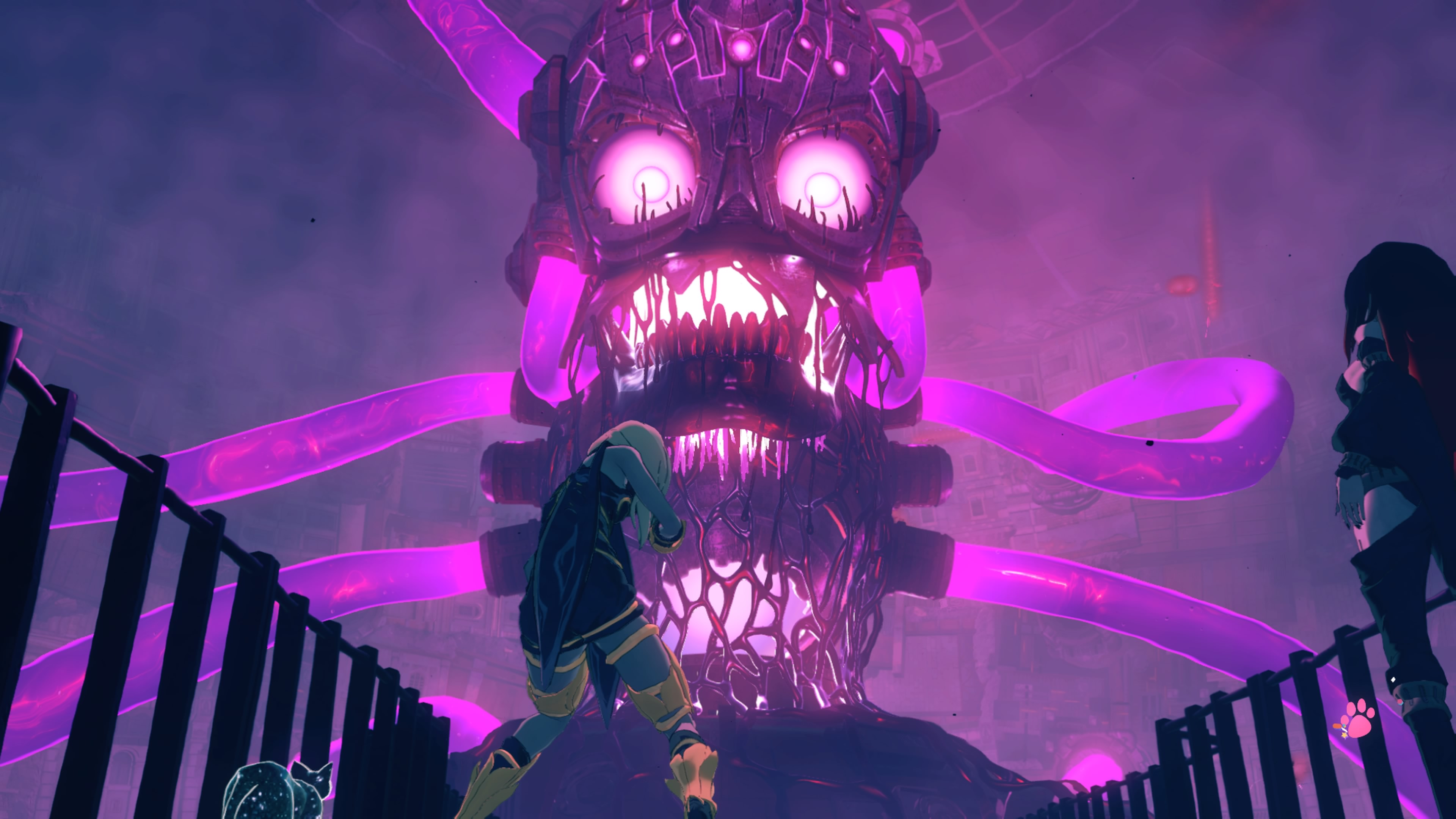 Collecting gems through missions or going to mine them will open possibility to level up skills. Doing so can extend your hits, gravity kicks, stasis or dodge. Special attacks can also be upgraded. It takes far too much gems to level up, by the end you will be short for like 30k if you collected everything so far. That will make around 50k of gems. It’s not even worth it to max out unless you aim for platinum. Kat also collects different stones that can be equipped giving you other type of boosts, like broader radius when collecting gem from afar, faster special fill and so on. Also nothing spectacular, even combining gems later makes no sense as game can be easily beaten without those. All too basic for my taste, with no real impact. 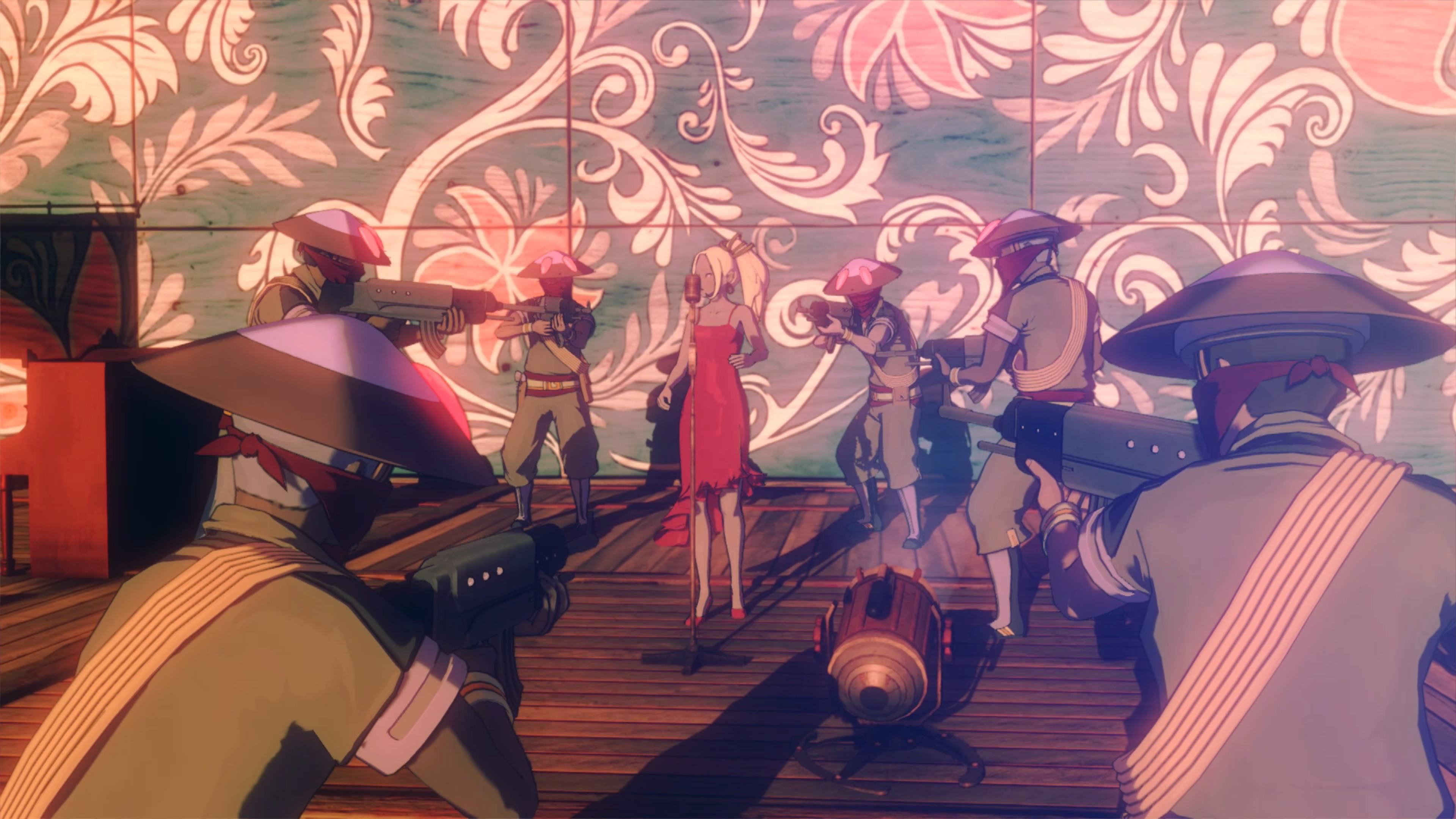 Diva Gravitanica. Not only that she obey the laws of physics, she can also sing.

Side content is what half of the game is about. There is so much to do, and yet so little. One of the things you unlock are mining areas when you can descend to dig for gems or explore when certain phenomena appears. Those spawn special enemies which can drop better stone gems for you to equip. Events like these are random, so if you don’t collect trophies you can skip them. They are not worth your time, unless you really like this. Later on you can unlock type of phenomena that is like going through levels doing challenges. It never interested me enough to go past level 10 there. 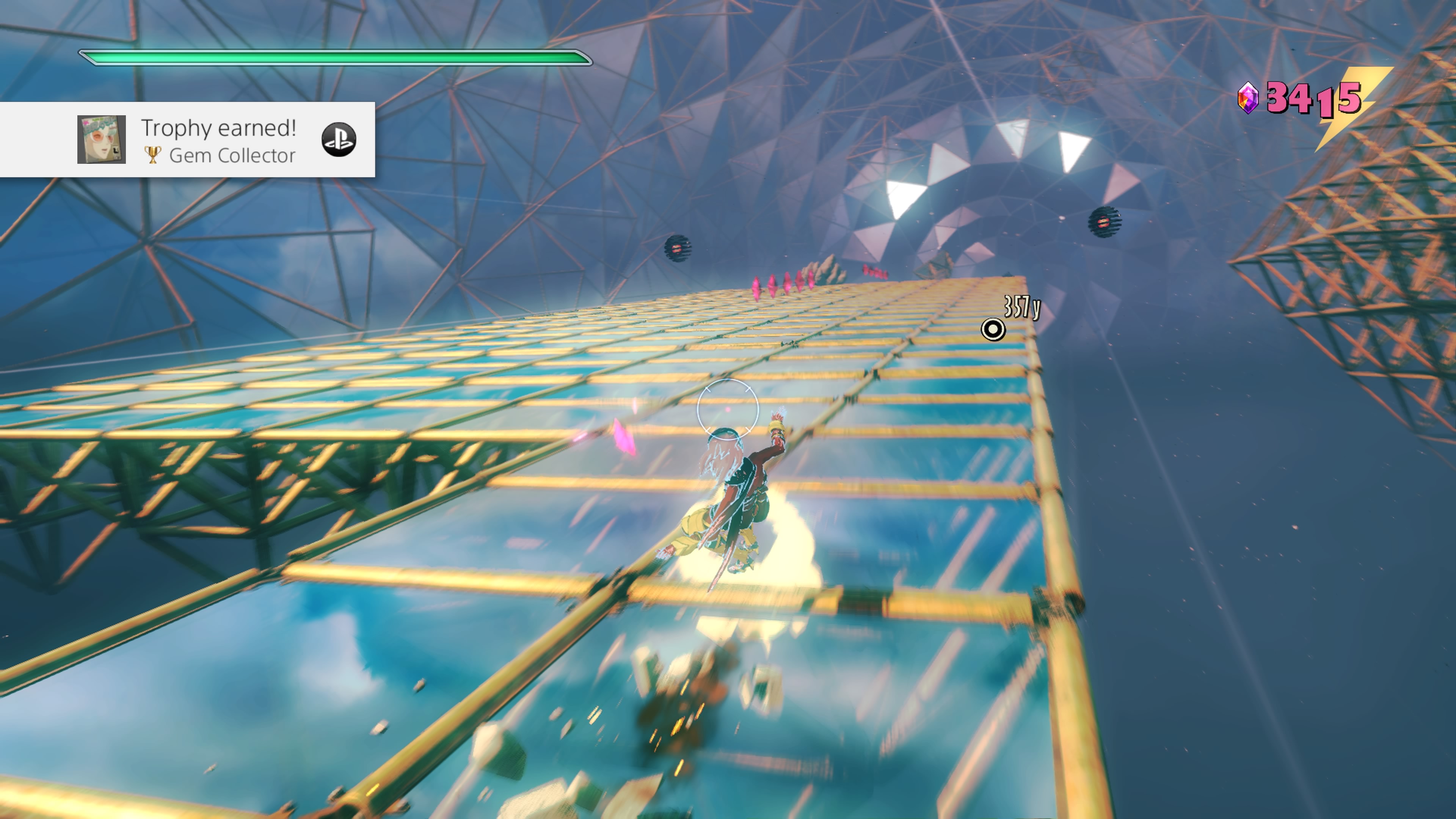 Slide down the road for 4 hours here to level up to max. Very fun. Not.

After each mission there will be side missions on the map. Talking with NPCs starts them. They are not very different from main missions, most of them being simple fetch quests. Some have great weird stories behind which makes them worthwhile, but in general it’s all the same pile of recycled repetitiveness. And just to say, there are 49 side missions. They reward you with some talismans to equip, furniture for your room (unlocked later in the game) or simply level you up to extend your Health. Many will dress you differently to perform some people gathering dressed as some celebrity, or to stop a father entering pubs. Few of side quest missions really makes it worth playing. 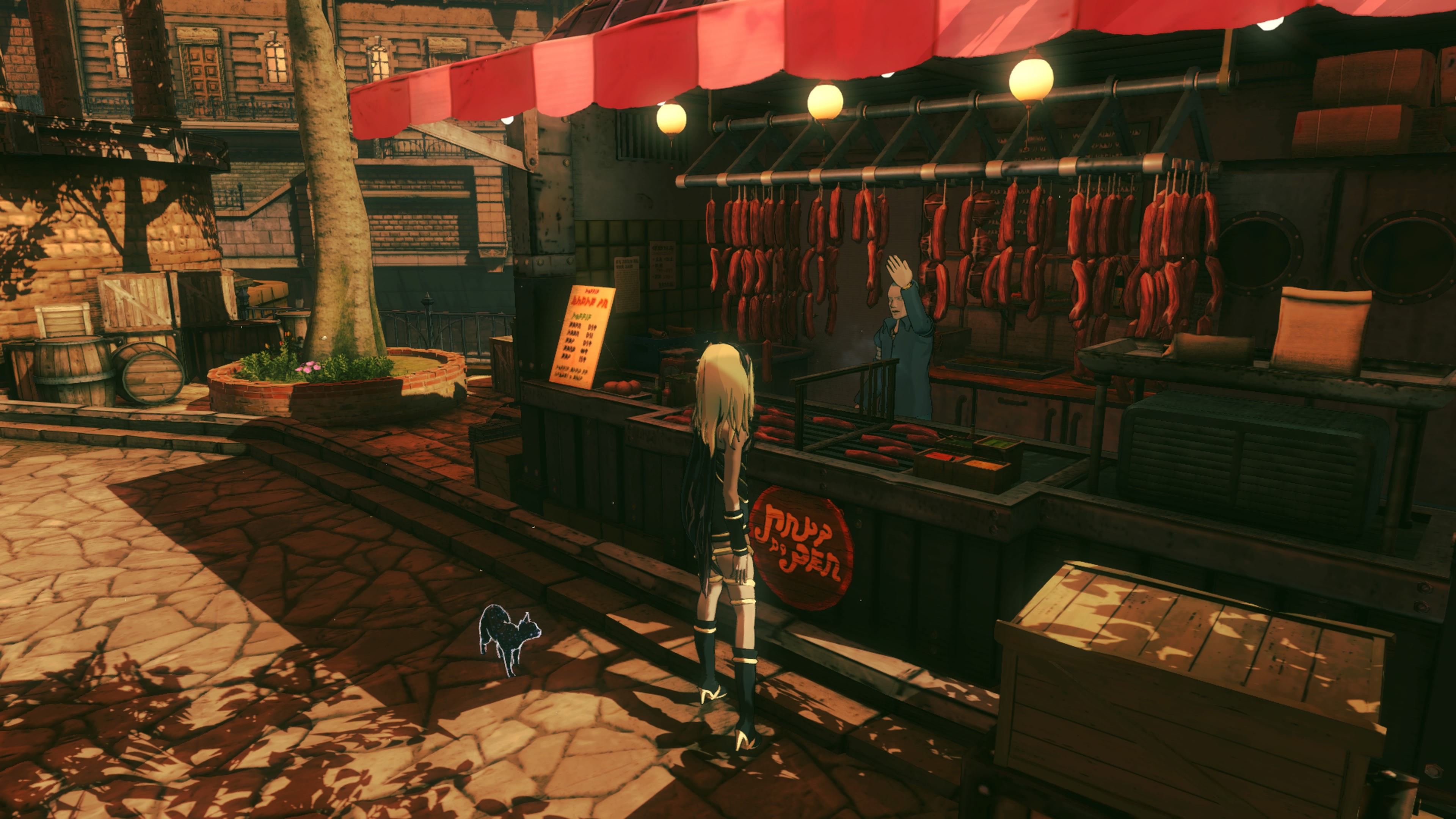 Everything comes down to sausages.

Next on the menu are challenges. Those, I liked. Certain missions unlock challenges, which is like finishing similar goals as in side mission just with times or rating system. All of those are short and fun. They are not hard if you aim for gold medal, so don’t feel discouraged.

As far collectibles go, after finishing some side missions you unlock Photo mode challenges. 6 categories, each consists of 10 pictures. There is a small hint what to shot, but without good guide it’s very hard finding all. Imagine looking for a man who stands in one balcony next to thousands of other NPCs in town. Or finding some ship at the bottom of settlement where you’ve never ever been. Silly stuff. 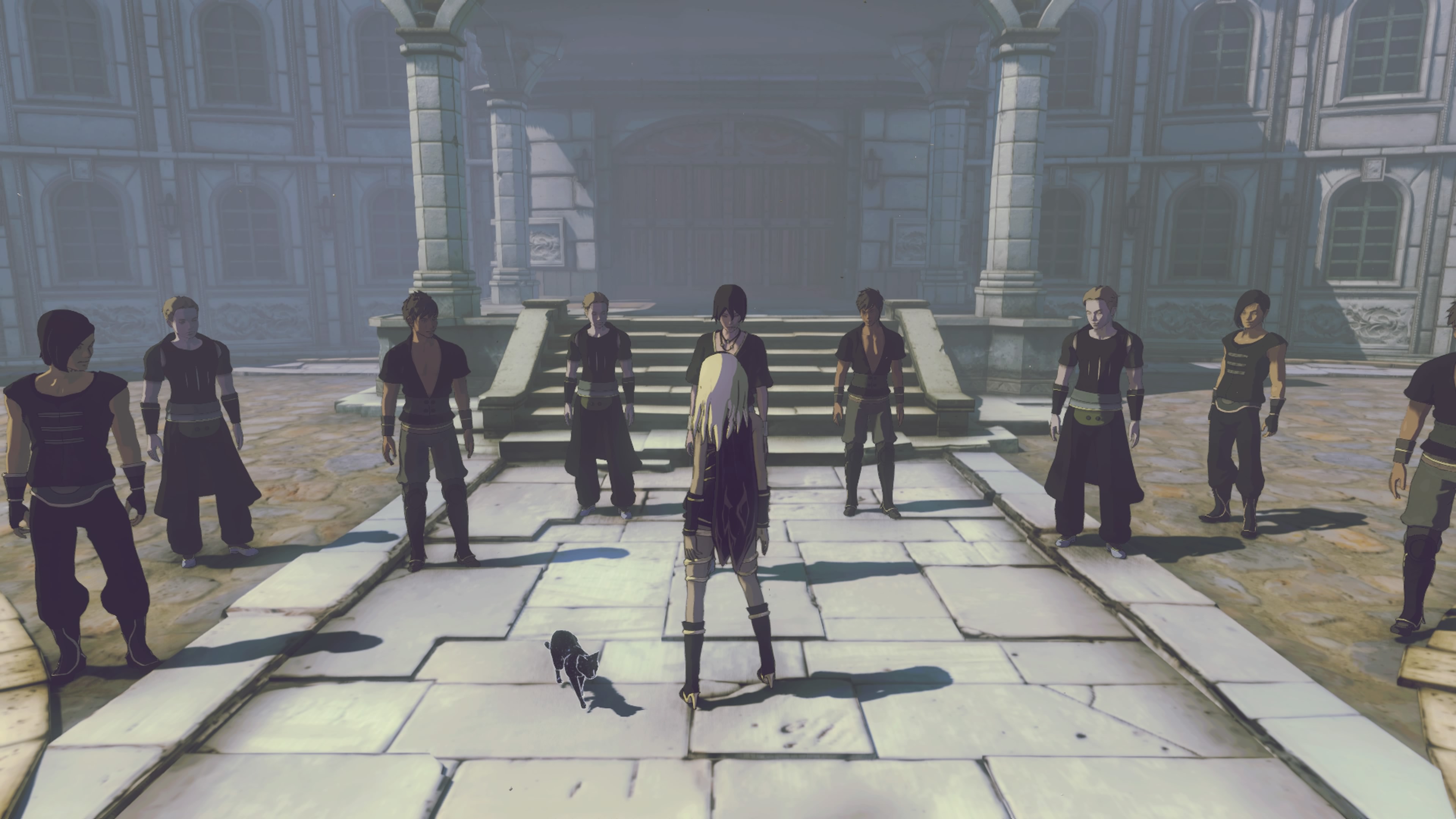 Scenes are like the most beautiful anime you've ever seen.

Much later in the game there are transformations. Kat can become panther for limited time and almost nothing can stay in your way. Lower difficulties don’t present a challenge, maybe if you want some, try Hard at least. Raven and Kat both have very similar powers, so many missions she will be your side kick. Smoking one that is. If you are interested, there is free DLC with Raven which you can download. Maybe someday I will too. There was some online system and ranking, but on this day, it’s discontinued. No idea what it was for, mostly I guess to compete with challenges and share photos of rare treasures that you can find. 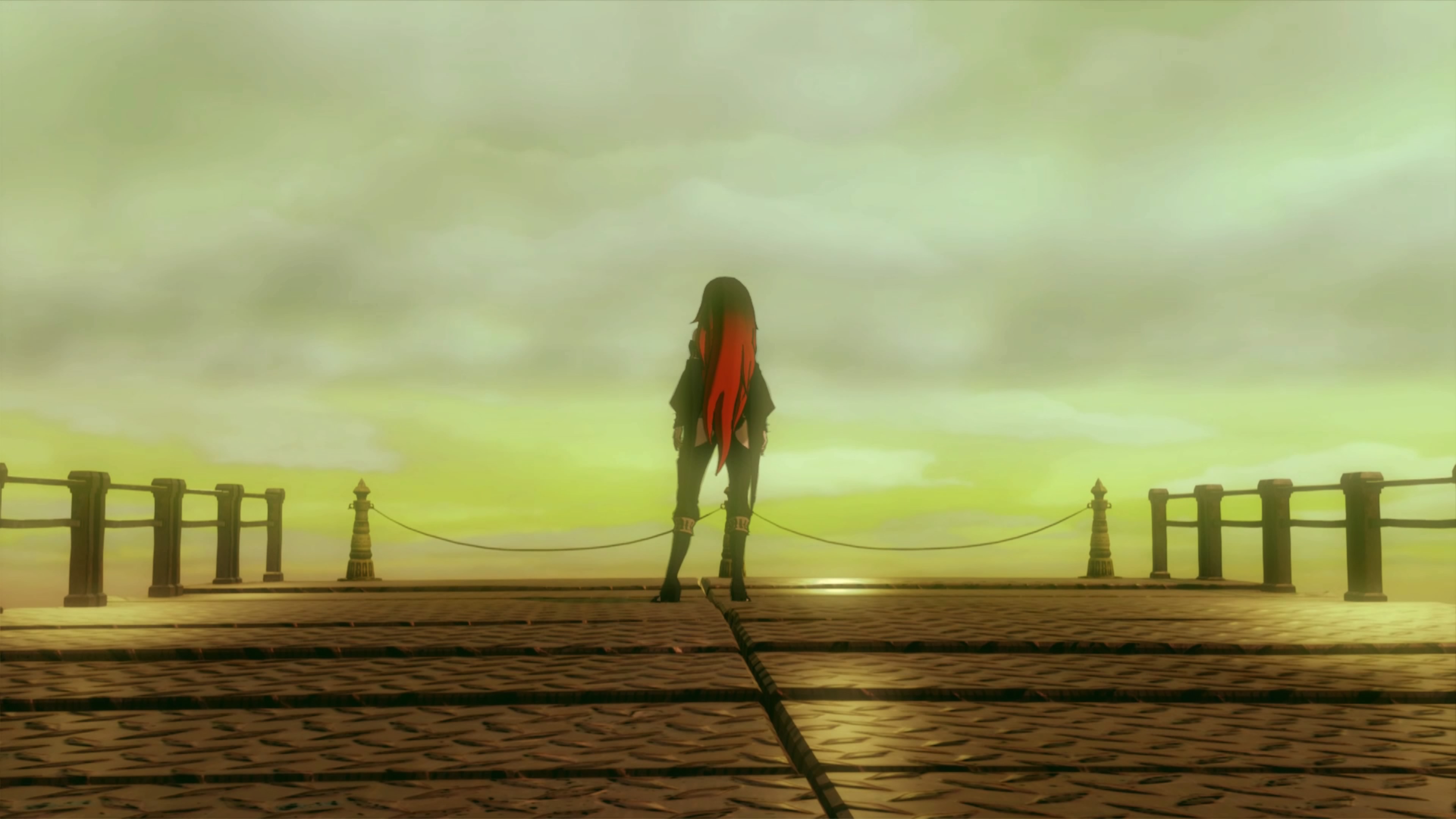 Raven. Nothing else to say.

This has been one unique experience. I liked it. Game suffers from serious repetitiveness factor, clunky fighting system ruined by camera and mediocre storytelling. Everything else is a class on its own. Now I have to play first Gravity Rush because I like weird games. Combine weird with gravity, 2 girls, cat and raven and you are good to go.

"Get your gravity boots out for a spin, drag a cat and shift through the game."