"Well, i can't describe this game in just few words, so imagine sheeps, nightmares, adultery, Tetris and Persona had a child. That about sums it up." 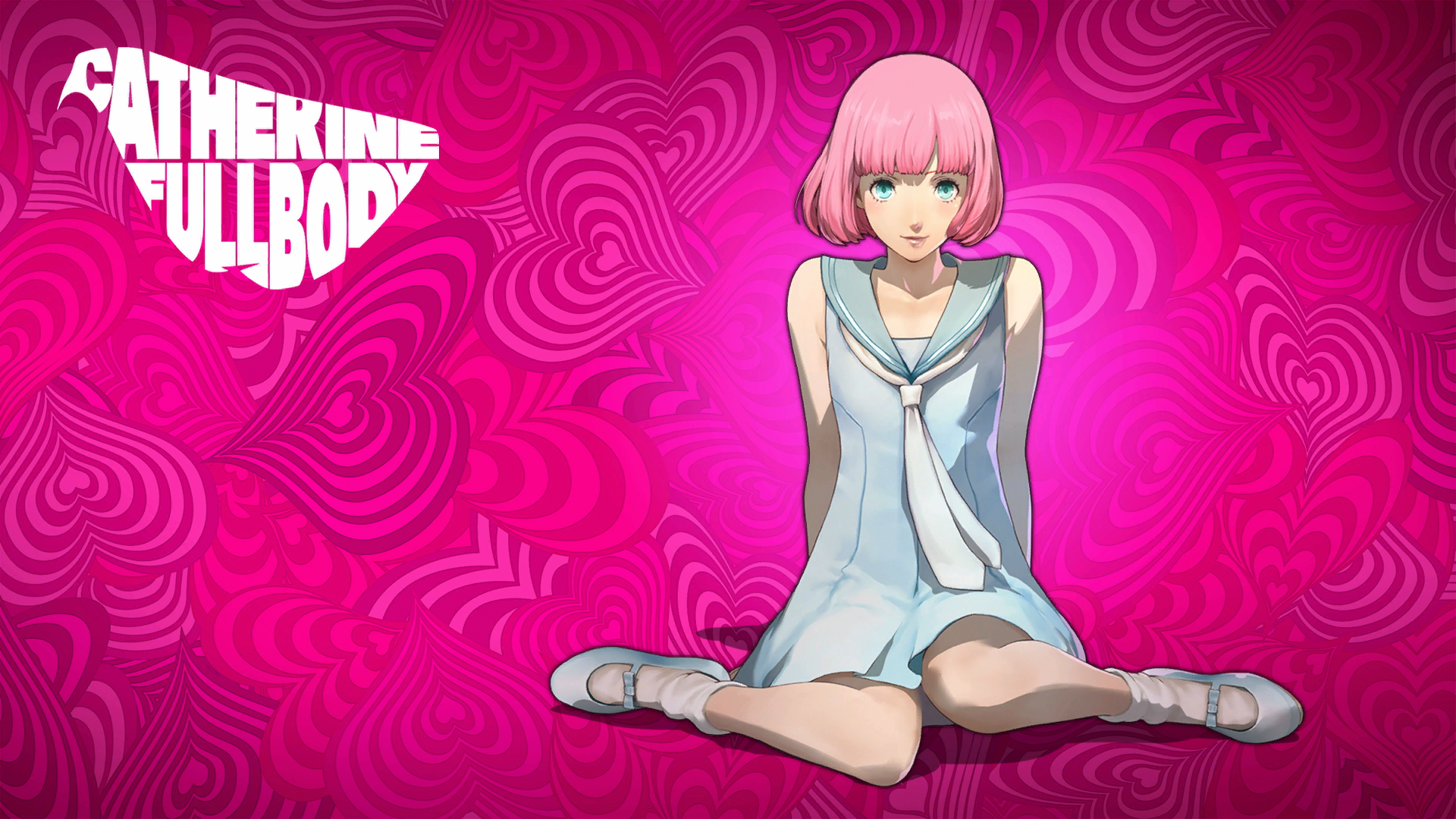 Only for your inner Japanese

Let me try to picture what this is all about. Expect dating simulator backed with awesome narration and extraordinary voice acting. Story evolves around Vincent, 32-year old IT engineer whose job is to fix bugs and develop stuff, apparently, he also develops weird stuff his life.

While being normal, Vincent has a fiancé, likes to hang in bar with his 3 best buds and lives solo. It seems like he still enjoys his life without constant nagging about doing the dishes and listening “I’m fine” whenever something is wrong. Or the fact that he lives in apartment so small that the only way to fit another person is to squeeze that person in milk cart and put in refrigerator. 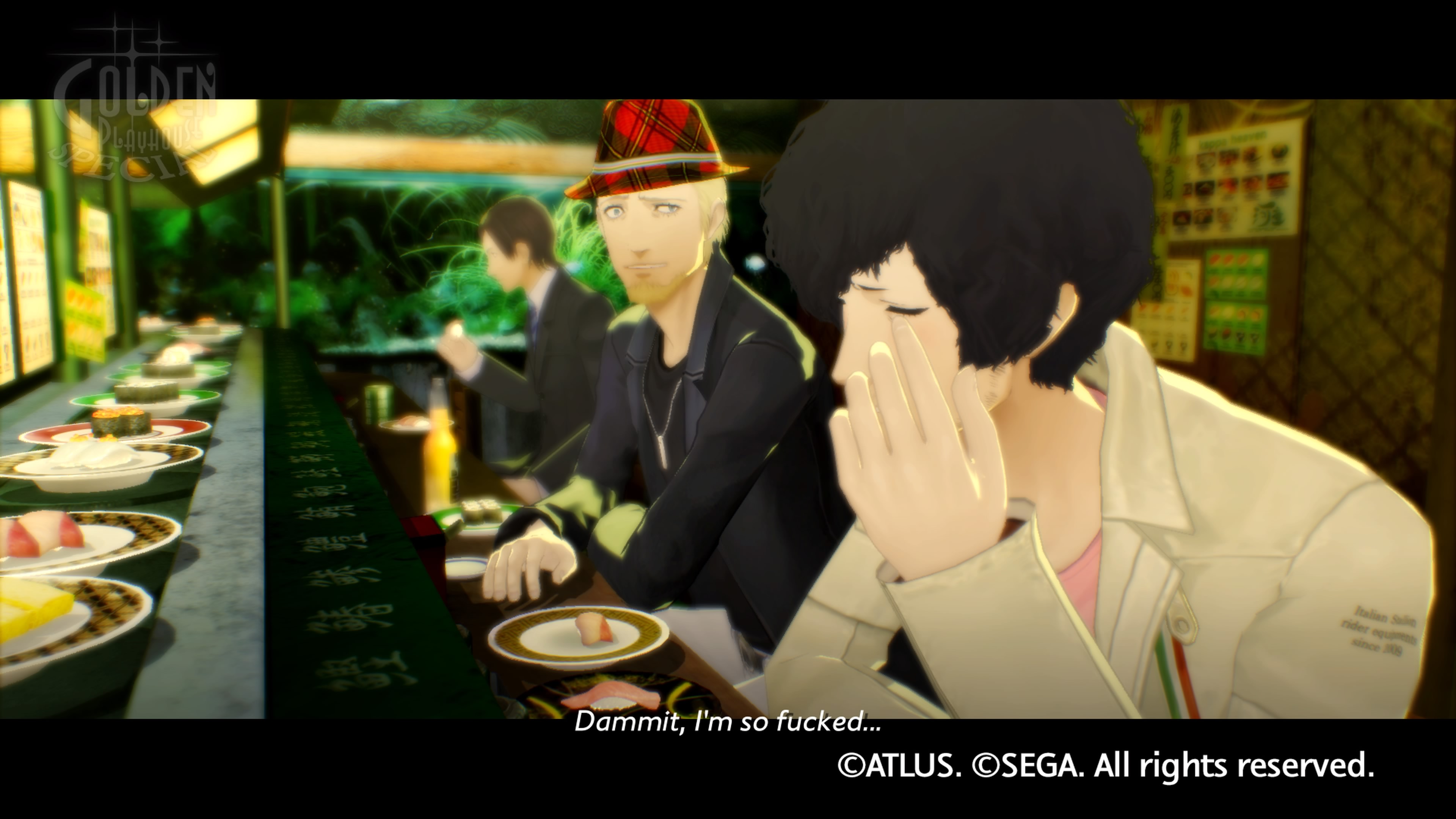 And so, our lover boy starts his wild journey when Catherine enters his life. Adultery at its best, sorry, weirdest. But one thing stands out. Vincent starts to have awful nightmares. Coincidence? I don’t think so. After every night of getting drunk in a bar you wake up in a dream. It’s a beautiful sight full of sheeps, stone blocks and monsters chasing you from bellow. I guess from hell itself. With only his pillow and in underwear, our hero climbs to the top in order to save himself.

“Those who die in their sleep dies in real life” – the narrator shouts. Let’s try not to die then. Welcome to Nightmare Stages, our main and almost only interactive side of the game. The concept of the game is puzzle solving drama while saving yourself. Every night different nightmare, more and more complex and longer levels. It’s like playing Tetris upside down, just here you are moving block to form your way to the top. 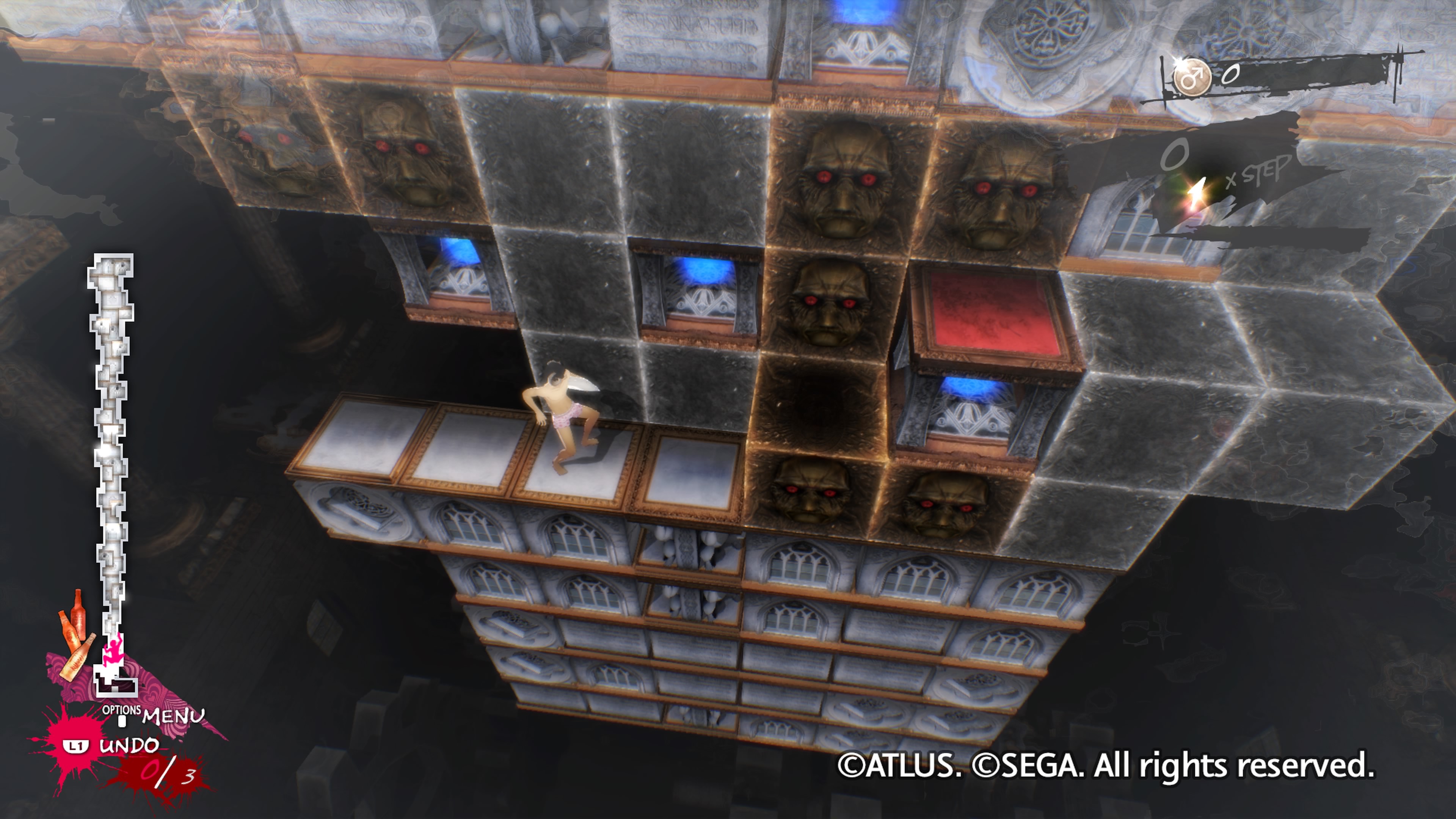 Darker blocks are heavy and take more time to pull them out, while stepping on red ones makes them blow block around.

Sounds simple enough? It is, in general. To form your way, you will need to use different brain techniques and pull blocks so that you can climb up. You can’t just climb set of 2 blocks, you will need to pull one and then climb. There are few helpers like beverages which grants jump up to 2 blocks, book to remove enemies from screen or maybe block generator to help you form blocks if you miss some ground under your feet.

You will learn neat stuff on every in-between safe zone floor. Those techniques will come in handy as you will often find yourself in situations that just need that trick you can learn to proceed. Worry not, if you think it’s a dead end, there is an undo button. Depending of difficulty, there are certain numbers of undo moves. Collect pillows (yes, pillows) through the level to gain more, making your bad moves completely irrelevant as you can go back few moves and go with different strategy. 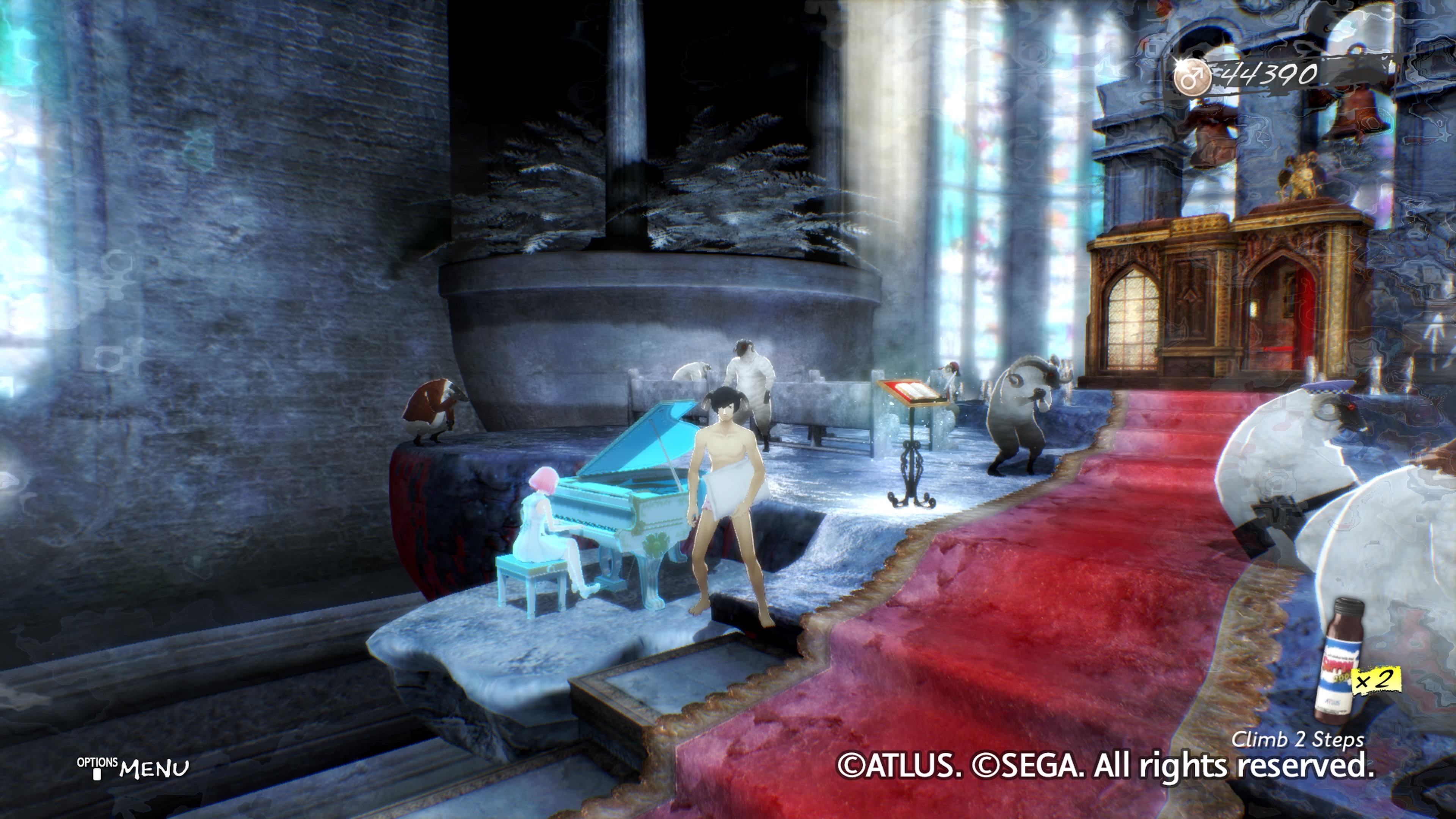 Somewhat after 4th chapter real sex begins. I managed to obtain golden rating award at end of each nightmare, but other half of the game raped me. The thing is, you need to keep the combo going while collecting almost all gold pickups through the floor. If you go slow, combo stops. So, it’s a bit hard later on when there is just so much to think about to be fast and efficient. I liked the diversity of blocks; some will kick you down when grapping on edges, exploding blocks are cool as they leave cracked blocks around which you can run onto just few times until they dissolve, spike blocks will kill you if you stop on them… Imagine what is like to hunt for platinum trophy here, I just don’t have the time and will.

Every final level of nightmare stage is a boss level. That means you need to climb as usual while some thing chase you from bellow. Bosses will use special attacks and sometimes remove blocks from your way, kill you in one hit – in short, they want to make your life harder. As if it was not hard as it is. By now you have general picture of the game; I say its worth it, so let’s focus on deep stuff and other game mechanics. 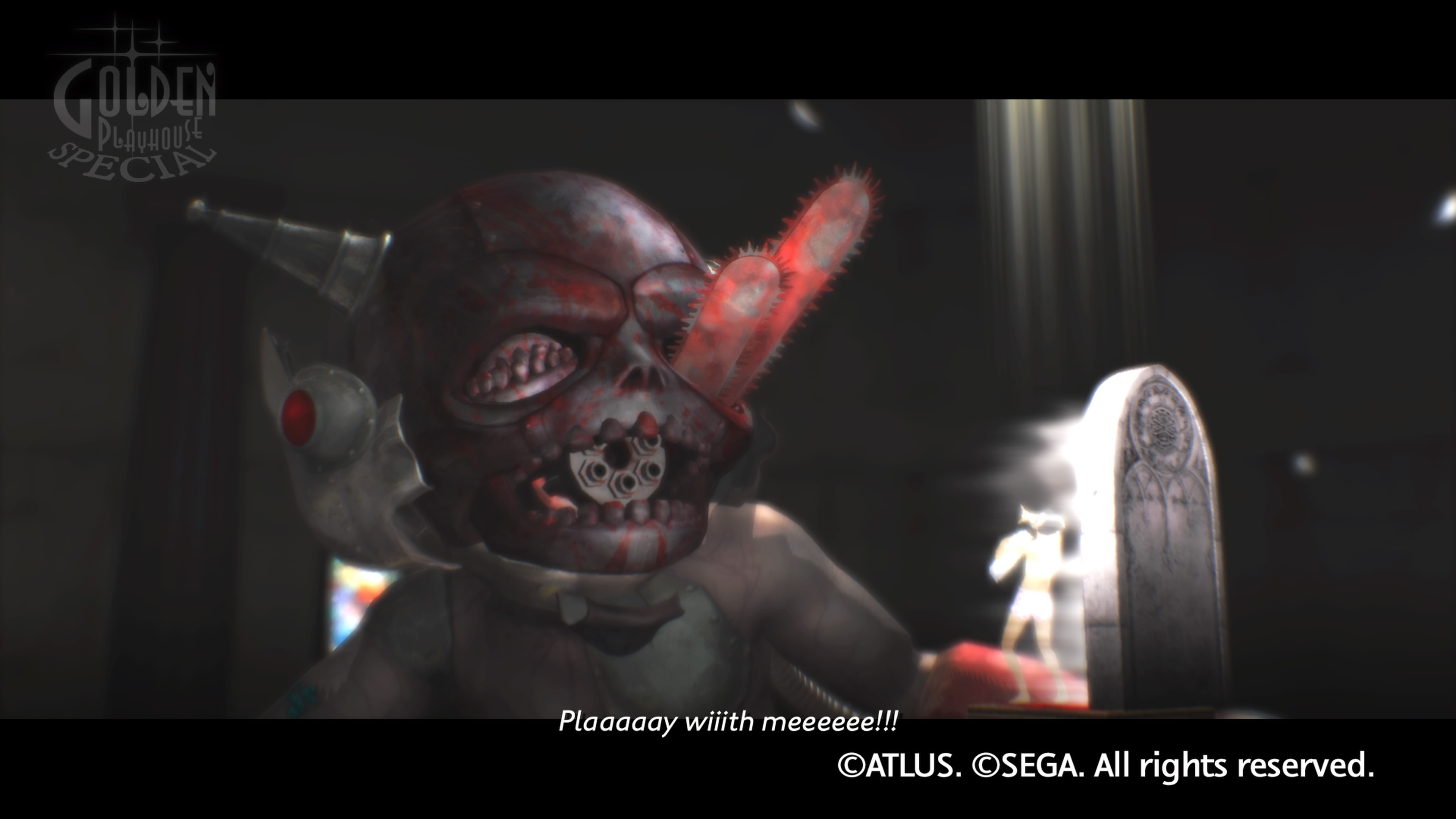 I would say that we have a puzzle-platform social bonding experience in front of ourselves. It’s weird, funny, interesting, at the same time it’s for very targeted audience because not everyone likes this anime manga styled drama puzzlers.

A Sheep kicked me in the middle of my dream

The whole main acting crew recorded their lines once again. Alongside really great narration, voice acting is the next best thing. Almost all scenes are dubbed with voice, which makes them easy to follow and enjoyable. They represent all situations close to real life events and since they are so good, it just fits. If you loved Persona 5, you will love the artwork here. Many will notice that some actors are the same here and there; remember the voice of bar keeper in Persona? He is here. His voice that is. I just love the whole cartoonish artwork style. On top of it all, music is simply great. Melodies just reminds of Persona and as I cherish that game so much, this was a nice touch. 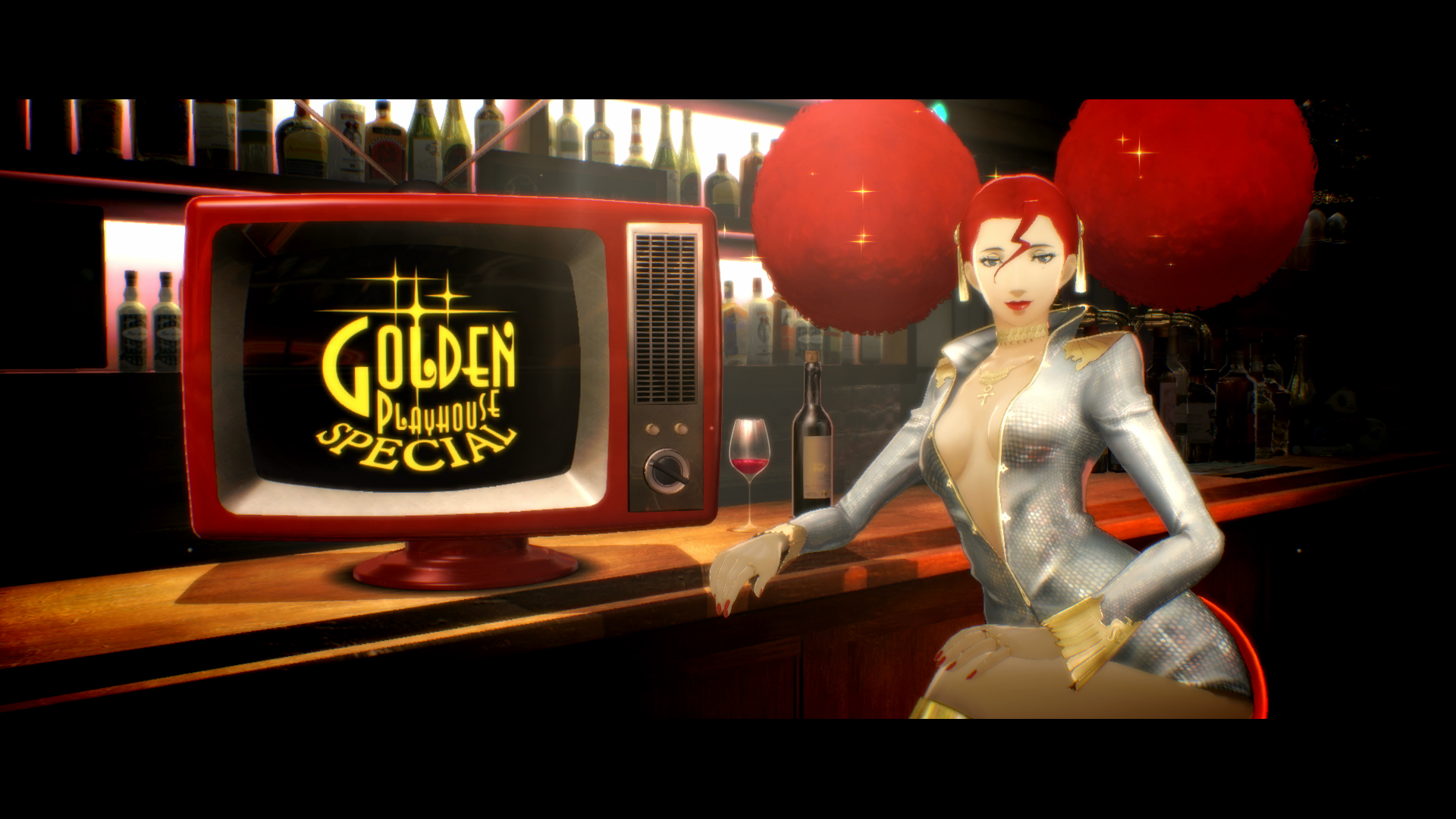 Golden Playhouse is a story mode. And this on the right side is what you should expect. Of course, wine from title is in the middle.

Select your answer, most probably you will pick wrong one

We have opportunity to meet Rin, a new crossroad character in the game. Game features 5 new endings, on top of 8 in the old version. More than 20 scenes are recorded, and for hard core fans that should be a big plus. When it comes to outcomes, we can cross the line with Heavy Rain, Destroit or other similar games in that aspect.

In between nightmare levels, or through bar events – there is plenty of chances to provide different answer. Each answer tends towards good or bad direction. Even neutral zone has its own flow. There is so much to cover in this area but that would spoil the experience, so it’s advisable that you experience it by yourself. I recommend few playthroughs, as changing the outcome in some situations change the experience a bit, even the secret extra level get locked if you don’t answer properly.

What I liked is that game is one big cliff-hanger. Up until the end you have no idea what is happening. Not in a bad way, quite the opposite. They really did a good job with all this branching points, that for sure wasn’t easy. 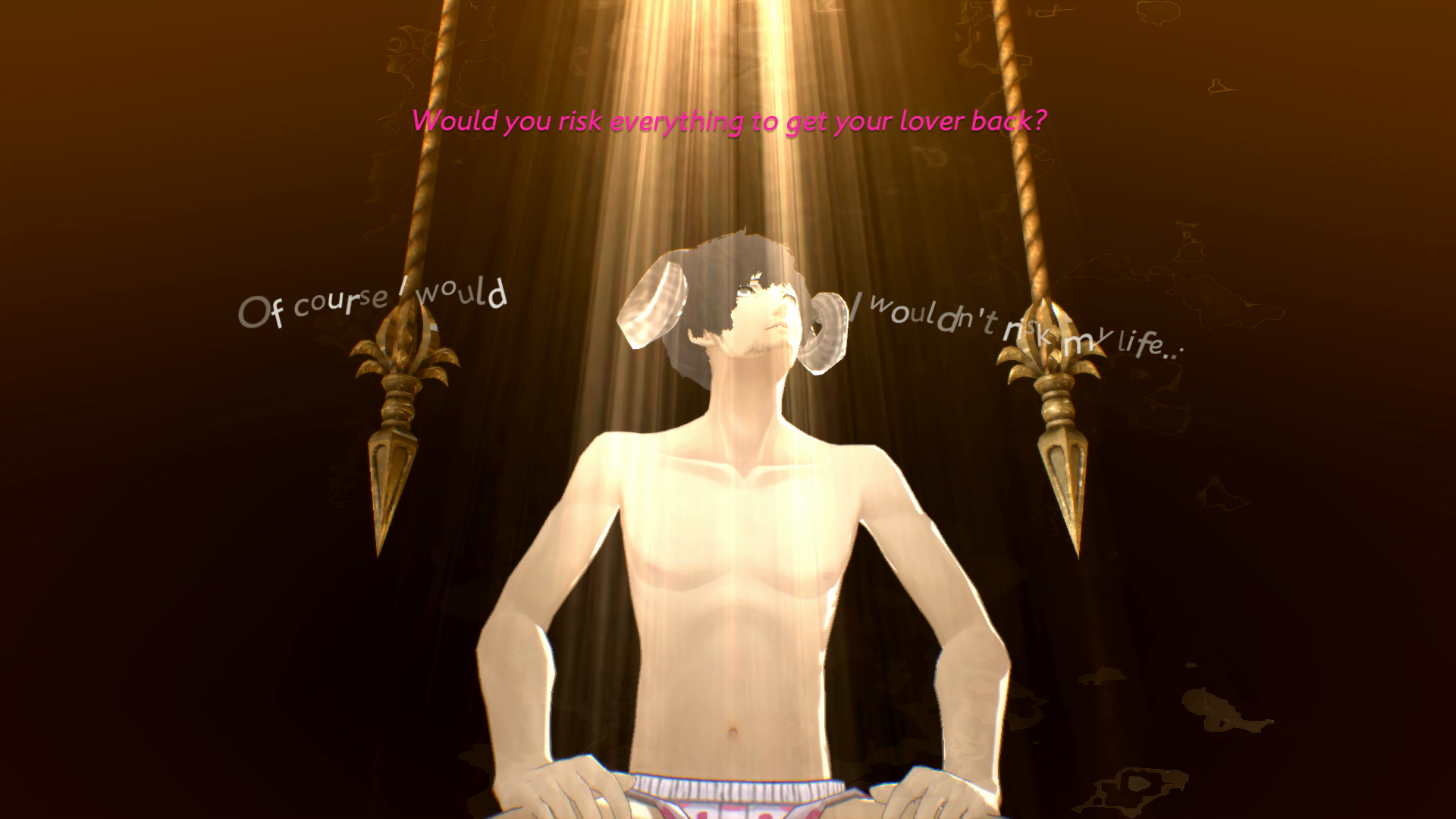 Questions are random. Think with your upper head.

I love how the game have only bar, nightmares and Vincent’s room as place of events. You would think it would get boring soon, but no. After every night you will find yourself drinking, talking about recent events and drinking a bit more. Who doesn’t love drinking with his buddies in a bar?

As soon as you drink whole beverage you will be rewarded with fun fact about that type of alcohol. I learned that for making sake there was a method of chewing rice and spitting in a ball, where it ferments, and you get alcohol. Also, I was told its not healthiest method. Sounds about right. 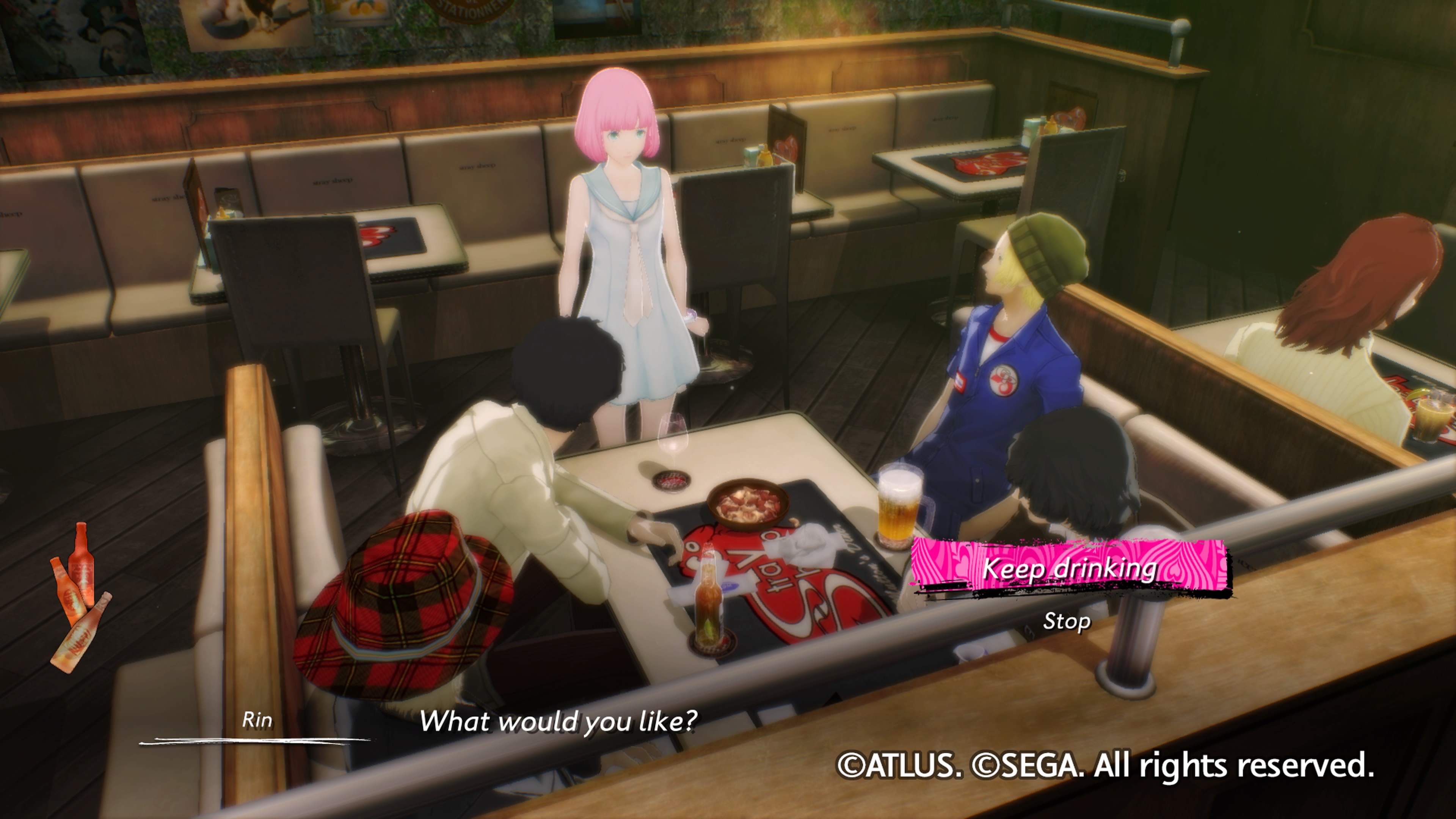 There is only one solution…for winning Platinum in this game.

Do not forget to talk with all NPCs. I will not spoil it for you, but it makes huge difference talking with everyone and answering positive both in a bar and in nightmare safe zones. You can find sheeps there, as well as the save points and a chapel. This version has 3 new NPCs which stories you can explore.

When you are done with social aspect of those safe zones, you need to enter a chapel and answer a question. Just a hint; you need to answer correct on particular questions to unlock Rin’s route.

You can also play different track using jukebox in a bar. Second activity and one big mini game is Super Rapunzel. It’s like a retro version of game levels where you need to reach Rapunzel to finish the level, colleting bonus stuff as you go. This is also expanded in addition to original version, so you can train yourself with 128 levels. Yeah, mind-blowing.

There are few other mods as well. We have Babel mode – 4 themed levels playable solo or in co-op. They are unlockable through the story. If you ever feel that you need to play more challenges, all this can be the answer. Colosseum mode is your regular Versus mode, plus there is Online mode which is something I will not even try because I simply suck at game. 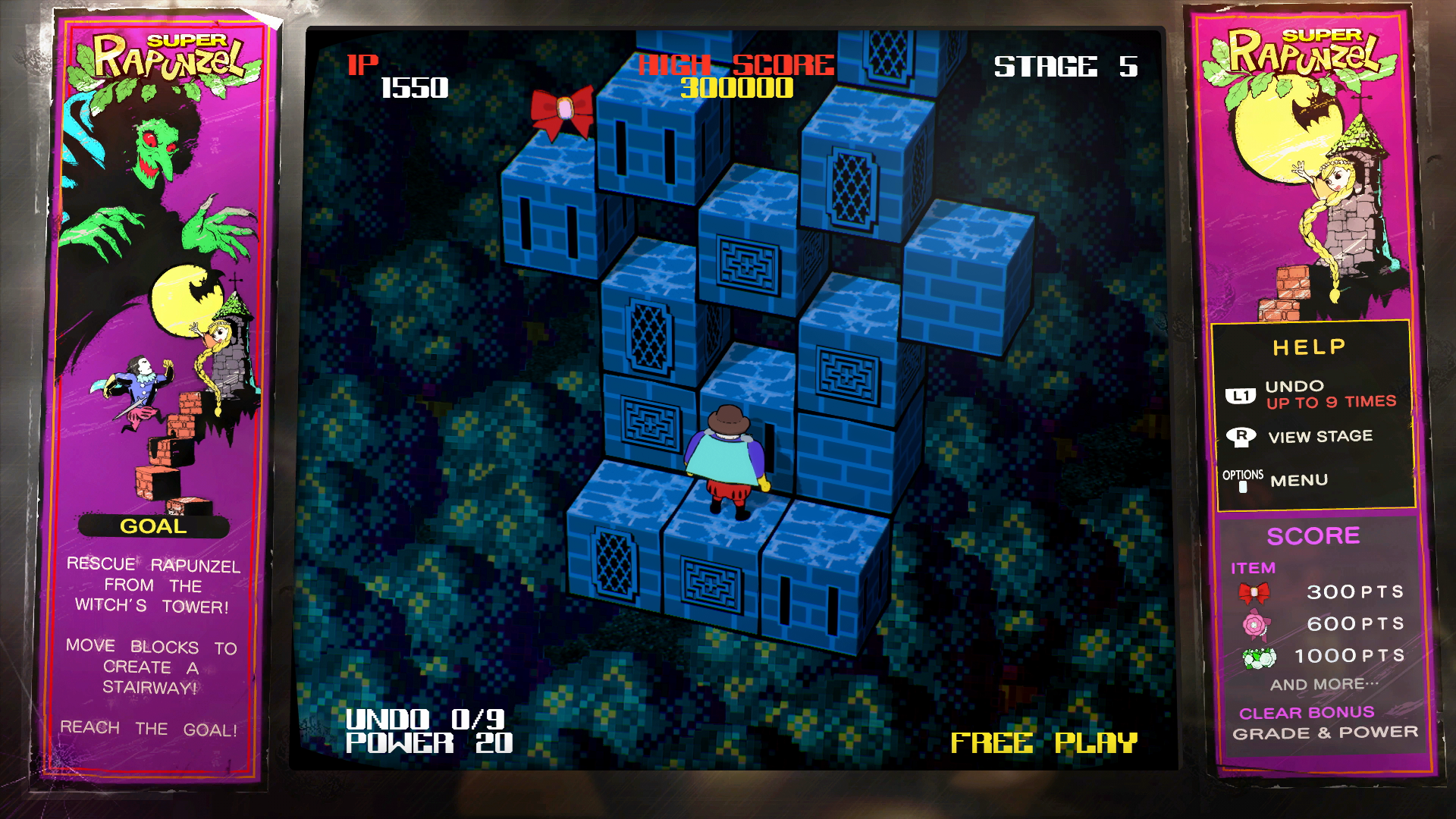 Reveal Rapuznel secrets, maybe she can show some boobs.

Classic experience on Normal difficulty is the best casual experience. You can always try Hard mode with Remix puzzles where all levels consist of specials blocks for even harder experience. Really, who won platinum here gets one free slap. This is nearly impossible and takes so much time to master.

Dushbag, neutral guy or good fellow? It’s on you. Alcoholic or puzzleholic? Both. Don’t worry if you miss stuff during first play, on second you can skip all nightmare levels and focus just on story. Calculate with answers to get to outcome you desire. It’s nice they gave us this option, because going trough all levels all over again would be overwhelming. 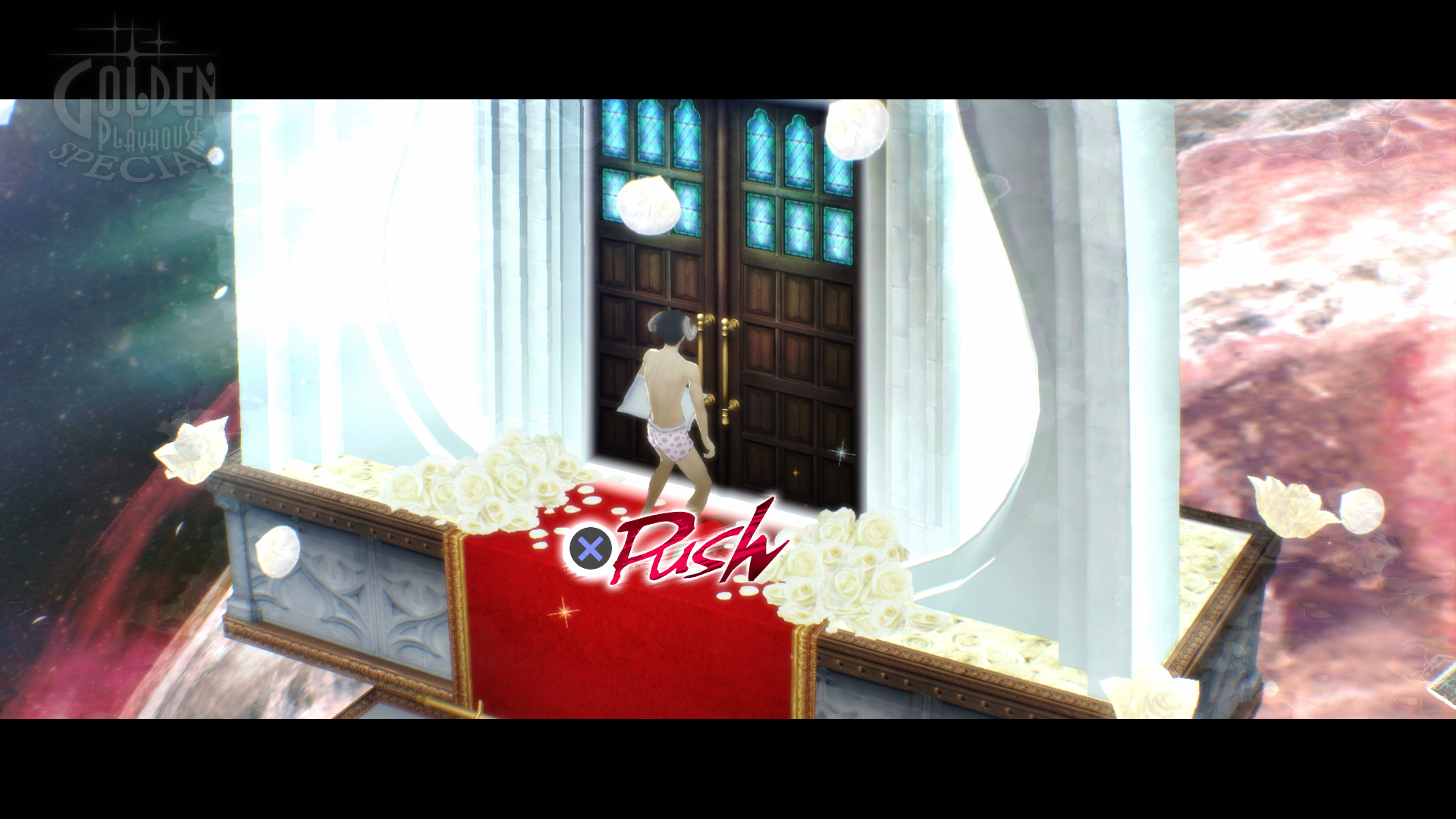 I still have no idea what I played. Or will it ever be less confusing in my head. The WTF is a WTF of WTF in this game. That is what it makes it an unique experience and why it stands out. I enjoyed the story, music and voice acting, while gameplay is not bad, but it’s just not for me personally.

If you do love Persona 5, don’t have issues with elements mentioned in this review, give this game a chance. Chances are, you will love it. I have high manga anime tolerance, but this exceeds all my measures. There is so much content and this is great example how well ports/remasters can be. All in all, solid firm edition.

"Definitely a fresh and unique game."